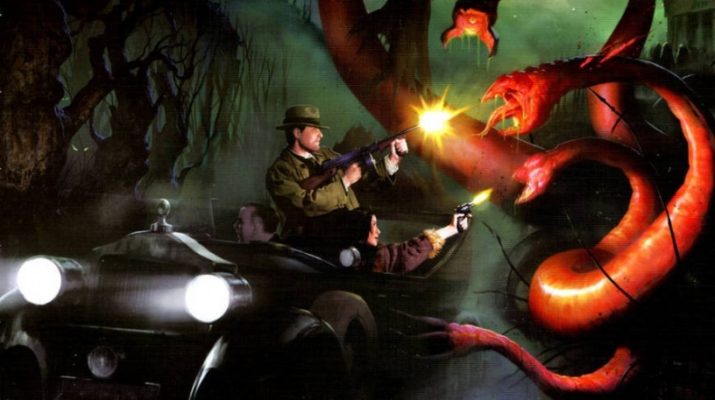 It’s that time of year again – Halloween. It really is one of the great holidays, and not just because it gives people a license to dress up like scantily clad weirdos. Something that makes this holiday great is that it’s both a time to get together with friends, but also a wonderful time to indulge in spooky activities. As the resident Arch Nerd around these parts, I’ve taken it upon myself to share some of the great tabletop horror games you can play this (or any) Halloween. These are listed in order of length and complexity so you know what you’re getting yourself into in-between sneaking candy from the bowl.

First on the list is a wonderful game of lying, misdirection and killing your friends – Werewolf. The game is simple to explain and great fun to play. At the start of the game a moderator hands out character cards to everybody else, who keep them secret. 2 of the players will have werewolf cards, 1 is a Doctor and 1 is called a Seer, everybody else is a villager/aspiring victim of some sort. Then the fun starts. Everybody who isn’t the moderator closes their eyes and then the moderator asks some questions. First, he tells the werewolves to open their eyes, wave politely to each other, and then decide which villager is on the menu. Then they close their eyes and the moderator asks the Doctor who they would like to save. Since the Doctor didn’t know who got picked to die horribly, they pick who they think the werewolves might eat. Then they close their eyes and the Seer gets to make a guess as to who is a werewolf and the moderator silently lets them know if they are right or not. 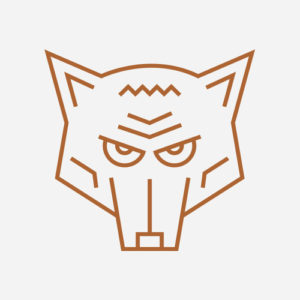 Then, all hell breaks loose. Unless the Doctor and the werewolves picked the same person, one of the villagers gets “killed” and are out of the game. Now the villagers get to talk to each other and try to figure out which of them is the werewolf. The thing that’s great is that the werewolves get to do that too, so they can lie or redirect or whatever else they want to do. Hell, they can even claim to be the Seer and blame somebody else. Since you can’t reveal the cards, there’s really no way of knowing. Eventually the players all vote on who they think the werewolf is and that player gets killed too. Then everybody closes their eyes and the process goes again. Eventually the werewolves get caught, or they eat everybody else.

First of all, what makes Werewolf a great horror game is that you can play it while doing other things too. So let’s say you are having a Halloween party, like the cool kids do. It’s possible to give everybody a card at the beginning of the night, have the first villager get gobbled up, and then go enjoy the party. After 15 minutes have a timer go off and everybody vote on who they think the werewolf is and continue the process. Eventually the sweet combination of paranoia, holiday themed drinks and mini Reese’s Cups will make for very interesting conversations. As a plus, if you get taken out it just means there is more time for the finer things in life – like costumed keg stands. 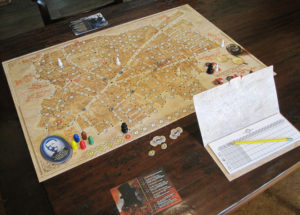 If you’ve always wanted the thrill of being Jack the Ripper but always worried about the dry cleaning afterwards, then you’d probably be interested in Letters From Whitechapel. The premise of the game is that one player gets to be Happy Jack, and everybody else is an investigator trying to find them. The secret goodness to the game is that the Jack player has their own version of the board. This allows them to move through the streets without the other players knowing. Then each turn the player who plays Jack will secretly move their character through the streets of London towards a target and give them the Sweeney. Meanwhile the investigators will move into position to try and catch Jack when he does. 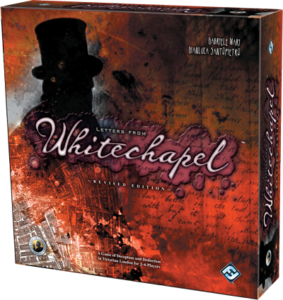 After the stabbing, the Jack player needs to race back to their secret hideout somewhere on the map. What makes Letters From Whitechapel really interesting is that the investigators know how many moves it should take to get to the murder site, so they can deduce an area where Jack’s Hideout is and better plan to catch him next turn. What makes it really fun for the Jack player is that they are at the table and can hear all of the conversations with the investigators too, and need to pull their best poker face.

If the investigators can’t deduce where Jack is hiding, then the round goes again, some other poor unfortunate gets impolitely poked and the investigation begins anew. Eventually either they’ll catch Jack red handed (literally and figuratively), suss out where his hideout is, or Jack will manage to kill all of the targets and escape. 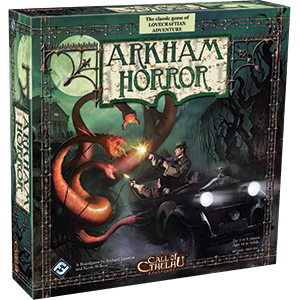 It says “horror” right on the box, which is usually a good sign. Arkham Horror is an odd game since it’s cooperative and players play against the game itself. There are a lot of fiddly rules to keep everything “fair” and challenging and it really does make everybody sit up and play together. There’s no way for any single person to win – and if I may paraphrase Ben Franklin, “You must all hang together, or most assuredly you will all be driven insane and killed by cosmic horrors separately.”

On a basic level Arkham Horror is a game about keeping eldritch gates from opening in the town of Arkham, Massachusetts and letting through both horrible monsters and eventually some weird elder thing that will kill everybody and end the game. The board features locations all over Arkham along with both dangerous areas and places for players to increase their powers and abilities. But something that Arkham Horror is great at is that every turn a new card is drawn from a deck of “Mythos” cards that can radically alter the game as well as unleash some fresh hell to make your life difficult. It has the effect of making it so that no matter how well prepared you think you are, or whatever plans you had to close gates, they all get gobbled up once a Star Vampire hits the table and wants to creatively rearrange your anatomy.

The first time you play, try to play this with somebody who knows what they are doing. The rulebook is 20 some-odd pages long and the way that the rules interact verges on esoteric. Arkham Horror is not what I would call an easy game to get into, but like Twilight Imperium the rewards are amazing. When the game is going poorly, the entire world gets devoured by Cthulhu (or worse) and everybody dies. When the game is going well you and your friends are on the edge of your seats, trying to plan and organize encounters and figure out who is going to another dimension to close a gate. Meanwhile new gates and new monsters keep appearing all over town, the shops are starting to close and some awful final boss threatens to make everything for naught. It’s likely that players will lose at Arkham Horror more than they win, but when they do win those will be the stories that they’ll tell each other for years.

Well this one should come as no surprise really, since Dungeons & Dragons can really be any genre you want it to be and horror is no exception. If anything, D&D really wants to tell scary stories. The monsters alone are often good enough to build an entire encounter or campaign around. In addition the ability to craft a story that sets the player’s need to do “heroic” things against something that they don’t understand is a wonderful subversion of fantasy tropes. The best part is that these kinds of stories can often become something that your group looks forward to every year.

Some things to keep in mind. First you need to build a good villain. Second as DM you are going to want to have your players create all new characters. I know, maybe your group has had characters that they’ve played for a long time, but you really do not want to throw those beloved heroes into the maw of a horror themed campaign, because let’s be honest – a lot of people are going to die. If you let the players roll with their “mains” one of two things will happen. Either your corps of heroes will be reduced to corpses faster than a George R.R. Martin book, or you’ll have the Avengers showing up to Camp Crystal Lake. Nobody is going to be happy with either of those options, so just make new characters for this campaign. Hell, maybe they’ll get lucky and next Halloween one of them gets to be the grizzled survivor. It’s been known to happen.

As DM you’ll discover that players will make characters that they normally would avoid. It’s only a one shot anyway so it’s not impossible to wind up with a bunch of evil aligned characters in a horror game. The change in format really opens up what a person is willing to play. As a bonus if everybody is a dick there’s going to be less griping and more laughing when the bodies hit the floor.

Another caveat is that you need to have an idea for what your players might be doing after they have gone insane or died or whatever. Depending on the game, there is a non-zero chance that player characters end up dead. I generally like to give them the option of building a new character and jumping back in, but that saps the danger from a horror game faster than the villain being a fluffy bunny. Instead make sure the game is short, like under 2 hours if you can swing it; with 2 encounters tops. Since you’re the DM, you should know how to do this stuff. Second, when somebody dies go ahead and draft them as a Jr DM. Let them control monster combat behavior and make the dice rolls. Then they’re involved and as a bonus, those encounters will be harder. That’s usually not great in most campaigns but in a horror game it’s just the thing it needs to generate more tension.

Finally, you need to keep it fair. Having an unkillable uber-monster might work in a movie, but in a game with stats like Armor Class, it gives the wrong impression (hope). So give it abilities that make it really strong, but give it key weaknesses. Maybe it can’t cross running water, or is frightened by some arcane sigil. This gives players an escape route and lets them try to formulate plans if things go south. If you really want to be a bastard, figure out a way so that killing/solving whatever it is requires some kind of sacrifice on the part of the players. Like a good Lovecraft story – nobody gets out of your horror campaign intact.

With that, hopefully I’ve given you some good ideas for horror games to pull out on your favorite spooky holiday. So stay in, pour yourself something pumpkin spiced, and have a great time.

Story Time : A Fire in the Dark 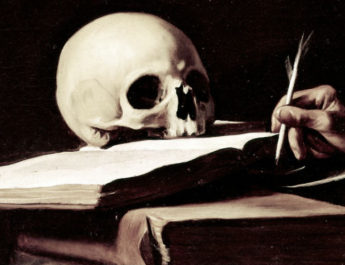 October 3, 2016 Eric Carr Comments Off on The Recipe for Fear : Writing Horror Stories