My body hurts and my head is weary, there is sleep crusted into the corners of my eyes. It is hour 4 of the cult classic board game Twilight Imperium. Before me my foes cower in the face of the galactic might of my plastic purple fleet. There are dozens of small neon colored spacecraft out on the board and it is up to me to conquer them. Five different armadas all crafted with the same care as mine and all of them focused on one singular objective, Victory Points. Ever since I captured the Capitol planet, Mecantol Rex, my opponents seem seem to rain down upon me. Every player has a different strategy in mind, a different play to dethrone me. Some don’t even care and only see war and chaos. Regardless the board is packed full of danger and intrigue and despite feeling like I have been put through a triathlon of rules, bad jokes, and poor strategic decisions, I am having fun and winning. When I sit back and look at the board I am struck by the sheer amount of stuff layed out before me. There are dozens of things to keep track of: cards, tokens, phases, Carr’s friendly advice, and that’s just what I need to really pay attention to. Beyond that there are minor details that I need to log in the back of my mind. From other players’ positions and their current board state, to the abilities of their space races and how each of them could end up ruining me if I forget. It is a lot to take in and when I take a step back to grab a beer and look down on a 3’ by 8’ table bursting with activity, I am struck by how far I’ve come since the beginning. 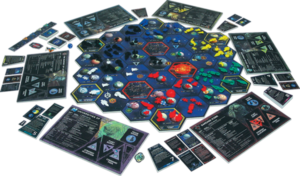 The idea had started out simple enough. I was looking for space themed article ideas and after being introduced to some intermediate board games several weeks prior I was feeling confident in my table top abilities. Perhaps it was finally time I was introduced to the infamous Twilight Imperium. It seemed like the perfect choice, a lucky marriage between our monthly theme and something I have always wanted to do. And as luck would have it a our Editor-and-Chief, Eric Carr, happened to have the game in his personal collection and playing it was just a matter of finding time. For those not in the loop Twilight Imperium is the granddaddy of all board games. If you would all kindly take a moment and imagine what would happen if Risk was mixed with Settlers of Catan and the end product was further merged with Game of Thrones, then TI is something like that. It is long, each game averaging between 4-8 hours, and has a rule book that is close to a novella in length.

In other words TI is not some game to be taken willy nilly. You have to want it. There is a certain kind of dedication needed as even the game setup is a process. First everyone picks a space faring race card. On that card is a bunch of important stats and information. It tells you what your starting starfleet needs to look like, what technology you start with, what racial benefits you get, and most importantly it houses all of your command tokens. Which are essentially an in game currency used to do things in the game ie, build, attack, politic, and progress yourself towards those juicy Victory Points. I was given Sardakk N’orr as a starting race. They are an insectoid species that specializes in war and gives benefits related to combat interactions and playstyles. Which turned out to be a bit of a bust given that the opening moments of the game are slow and lumbering. Battles are few and far between if there are any at all. As it turns out what I should have done was go full mental and attack everyone and everything, but I didn’t because I was new and sucked. Since I didn’t really play them like I should have it’s hard to form an opinion on them as a whole but if it’s worth anything they do look pretty bad ass on the race card. 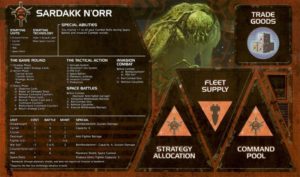 One you have your race you are given their corresponding home world and it’s time to start setting up the playing field. TI’s game board is much like Settlers of Catans, it is built from the ground up with small hexagonal cardboard map pieces. On those pieces are a wide variety of planets, dangers, and empty spaces. All of which need to be strategically organized in such a way as to benefit you. This is made fair by going around the table and giving each person the chance to lay a piece one by one. When all the pieces are down it is time to set up your home world and fleet and finally, maybe, go to war.

Except even war in TI is a long and tedious process. There is a need to build first. To expand your personal fleet, to research necessary technologies, and to form alliances that will hopefully protect your flank. Doing all of those things takes not only time but a plan and that my friends is what fuels this game’s entertainment value. TI isn’t about mashing your plastic ships into the face of your opponents, while that would be undoubtedly fun, that kind of gameplay doesn’t even come close to fulfilling TI’s potential for debauchery and destruction. Like any good multi-hour board game TI is about biding your time and working towards the “Park Places” and “Boardwalks” of the galactic world. You see in this game there is a fun little unit called a War Sun. It is a poor knock off version of a death star but even then it is a delightful little ball shaped star buster. War Suns are the end game. They can move multiple spaces at a time and they get 3 chances per to attack. These bulbous monsters are the proverbial shit hitting the fan and chaos rules the starways.

Now, I admit that the action does take a while to ramp up but once it does TI really hits its stride as one of the kings of the tabletop world. There is a rhythmic undercurrent to the way the game starts to move and shift through the different phases. At the beginning of each turn we all had to pick little placards that had different abilities and titles. They were things like Politics, Diplomacy, Warfare, Trade, Logistics, and each and everyone of them had layers to add to the game. The interesting thing was that even though I had never played the game before, the different actions you can take during your turn are so intuitive. War gives you the ability to move troops twice instead of once and Logistics gives you added strategy tokens. So as long as one knows enough to form a somewhat basic strategy they are able to put that idea into practice almost immediately. Which is actually really rewarding.

As the Sardakk N’orr my strategy involved playing under the radar and either A.) Building War Suns or B.) Sack the middle world, Mecantol Rex, and try to amass as many Victory Points as possible before I was converged upon and killed. That simple thought process took me through hours of gameplay and I was able to adapt to and learn at a very satisfying rate. That said, I still lost miserably. I was out flanked by an opponent I had long since started to ignore and he took my homeworlds before I could respond. Afterwards it was all downhill from that moment. I was doomed. Due to the time, and having work the next morning, I was forced to surrender and nearly 6 in a half hours after the beginning of the game it was finally over. 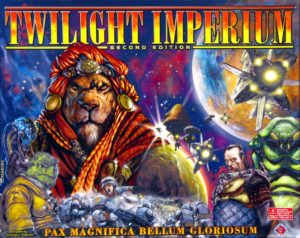 Twilight Imperium is less of a “game” and more of an experience. It is unique in that it isn’t something that anyone just sits down and suddenly feels like playing. There is serious planning to be considered. First there needs to be beer, second there needs to be food, third you need to find a sizable enough chunk of time to even finish the entire thing. Only then can you experience the game as it is meant to be. Which sums up my thoughts on the game as a whole. In perfect company Twilight Imperium is fantastic fun.

Letter From the Editor : To Boldly Go

July 1, 2016 Eric Carr Comments Off on Letter From the Editor : To Boldly Go

July 28, 2016 Jordan Feil Comments Off on Video Games In Space