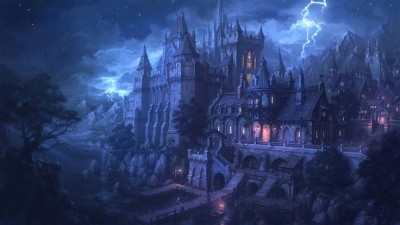 Outside, the storm has intensified. Rain pelts the reality warping old glass of the windows and fills the dusty rooms with a white noise that makes the party feel calm, even as it makes the candles flicker and wane. You all feel as if you mustn’t speak, and your armored footfalls seem far too loud within the walls of this mansion, so you attempt to move slower, and ever more quietly as you advance deeper into this ancient house. Deep in the dark corners sit the webs of spiders long dead – even nature’s reapers are no longer wanted here. Nothing lives. Instead the halls are filled with a sense of foreboding, and an unrelenting “otherness” that winds its way into your flesh and makes your skin crawl.

Just then! A door opens and a thin skeletal hand appears, followed by the gaunt body wrapped in tattered black robes who says, “You have awakened me from my slumber! I have a big day tomorrow and need my rest! Prepare to DIE!”

Well that just went off the rails at the end there didn’t it? Settings are all set, players are playing, and the DM is also busy gerunding and then something like that happens. Now everybody is laughing and that wasn’t what you were going for at all. The big fight is going to be full of awful puns about taking “dirt naps” and everything that was supposed to be spookily epic just fell over its own pants. All that remains is a silly battle and no way to escape what has happened to your campaign. It turns out that the problem is that your villain is terrible. Don’t feel bad, it’s not just you. Writing good villains is hard in general, and writing D&D villains has the extra difficulty of needing to leave room so you can improvise. Fear not, intrepid adventurers, because creating an amazing villain can be done, and we have the techniques for doing it.

It Stands to Reason

I’m going to assume you joined us last time, and all of those general rules still apply. Something that is important to understand about characters in general, and villains in particular is that they must want something. It’s part of Kurt Vonnegut’s 8 Basic Rules of Creative Writing (#3 actually) and basically establishes what a character’s motivation is. As a DM you should have given the players a reason in the form of a quest, so the first step when making a good bad guy is to do the same for them.

In a way it’s a good idea to think of your villains as protagonists when you are creating them. We’ll get into why you don’t want to think of them that way during the game later, but for creation it’s not bad. For now, let’s go ahead and work from the perspective. As an example of the technique, we’re going to build one from scratch.

So with that in mind, let’s meet Uzuk the Goblin Shaman. Except for the name I picked these attributes at random. If we were writing the story as if Uzuk was the hero, he would have needs and aspirations. We have a couple of data points to work with already with both a race and a class. Now it is possible that your world has neither goblins nor shamans, but there will be other attributes and broad archetypes that you can start from. For Uzuk, let’s start with him growing up and always wanting to be a shaman and saw the elders as powerful magic users.

Like a good protagonist, let’s put Uzuk up in a proverbial tree and throw figurative rocks at him. So after working hard to be a shaman it turns out that he was shit at magic. His lack of skill was a source of derision and scorn. Perhaps the other shamans made fun of him Rudolph style.

In most stories, this would be the part where good Uzuk studies hard and overcomes the odds and earns the respect of his peers, you know, like Rudy. But we’re not writing feel good Oscar bait, we’re summoning up a plague so let’s invert the expectations. Instead of buckling down and focusing on magic, Uzuk the Shaman shuns the arcane and discovers a wonderful capability with forbidden machines and engineering. A capability that he uses to create ever more powerful war vehicles that he uses to wipe out the shamans that said he wasn’t good enough. With them out of the way, now we can call him Uzuk the Goblin Techno-Shaman.

Now that we’ve sketched out Uzuk’s backstory there are some spaces left to play with. A protagonist, like any real person, will have quirks and traits that come naturally from their history. In the case of our goblin frenemy, his education was in magic, but his engineering is self taught. So when you encounter him, the language that he uses will lean heavily towards arcane terminology. For example machines don’t have pistons but fire wands, they’re not “repaired” but “healed,” and the engines are the machine’s heart. At the same time, perhaps those shamans did some damage to Uzuk’s perception of the world, so he would have a severe hatred from all forms of magic and mages in general. Each of these attributes begin to fill out his character, and give you ideas for what you can do with him.

While thinking of your villains as protagonists in their own right seems like a lot of work, what you are really doing is giving yourself the tools to be able to improvise when you need to. Creating characters is very similar to building an encounter in this way, and the more of a backstory your characters and villains have, the easier it is for you to work with them. Say for example, in some later adventure your players find themselves up against some Dark God of Magic. If Uzuk the Techno-Shaman is still alive they could recruit him to their cause. The previous adventures (which you did write down, remember?) would affect the way that the party and Uzuk interact with each other. That shared history makes for an interesting game session all because we went through the effort of making him more than just another goblin with a wand.

It’s important when it comes to your villains to introduce them early. Doing so lets the story naturally develop, since you can set their motivations against those of the players. Now, you don’t necessarily need to actually introduce them in person. So for example, let’s say that the players get a call for help from the local Wizarding Academy because of a rampaging horde of goblins using all manner of weird machines is coming. As a character Uzuk would want to sack the Academy because it is full of magic users (which he doesn’t much care for) and loot (which goblins are very fond of). Since the players are obstinately heroes, it is in their interest to try to stop Uzuk, and there is a built in expectation of that encounter.

As DM what you can now do is play with that expectation. Perhaps there are other encounters that you would create along the way. Maybe the players decide they need allies, since the 5 of them are not much of a “horde.” If that’s the case the characters that they meet (who should also have minor backstories and motivations) should have an opinion about what is going on. They can talk about the warleader that rides a massive steam beast and puts wizards and priests to the sword. Or that they have metal birds that swoop on any army that tries to stop them. Most importantly, how they want nothing to do with the players.

Doing this lets us talk up the villain before they show up and creates a sense of excitement and dread in the players. A good DM might also pepper into the descriptions snatches of information and ideas on how to beat the villain. Perhaps Uzuk’s hordes don’t hate magic like he does, or his engines all run using some weird fuel with limited sources. The important thing is that your villain becomes ingrained in the minds of the players and they think about him and fill in any gaps themselves. In effect, halfway between your descriptions and their imaginations a villain is spawned.

Finally it is important to remember that your villains are not the protagonists of the story. No matter how much we like him, the game is not the Uzuk and Friends Show. In the end every good villain must bow and exit the stage. If they don’t then eventually the players will get tired of them and the adventures will seem a little one note. Player characters also tend to level up and grow a lot more powerful, so at some point even a Goblin Techno-shaman will pose very little threat anymore.

Sometimes your villain can win, especially if it sets up the story for further adventures. Don’t be afraid to let your session end on a low note or a cliffhanger. When done well those can be really cool and make your players excited for next time. The key thing when doing this is to still give the players smaller victories, even though the villain ended up on top at the end of that episode. Maybe for example Uzuk did sack the Academy, but the players were able to rescue the students and professors. In effect, they gained something for their good play which is really encouraging. You know you’ve hit the sweet spot when afterwards the players start talking about capitalizing on their gains and making plans to beat your villain next time.

Eventually your villain will be vanquished, and while there is a desire to keep them around forever this is for the best. But don’t be afraid to chain your villains together in your campaigns. So even though Uzuk was killed or captured and sealed in an Amber Prison, that doesn’t mean that he didn’t leave a goblin shaped and steam scorched mark on the world. Like we know that he killed a lot of wizards, so maybe a future adventure has the players dealing with a new infestation of wizard zombies. Or maybe inside the Magic Academy Uzuk or his goblin brute squad played with some eldritch artefact and summoned something awful from across space and time. So now your players will continue to think about your villain as part of the history of the world even though they are not in the game anymore. As a bonus the players tend to get even more involved because the current situation is kinda their fault.

I hope you all found these tips and tricks for creating an interesting, and functional, D&D villain useful. If there’s anything that you find terribly helpful in your games, please feel free to let me know in the comments. Until then, break out your notebook and get to spawning since that countryside isn’t going to ravage itself.

Letter from the Editor: Scum and Villainy

March 1, 2016 Eric Carr Comments Off on Letter from the Editor: Scum and Villainy