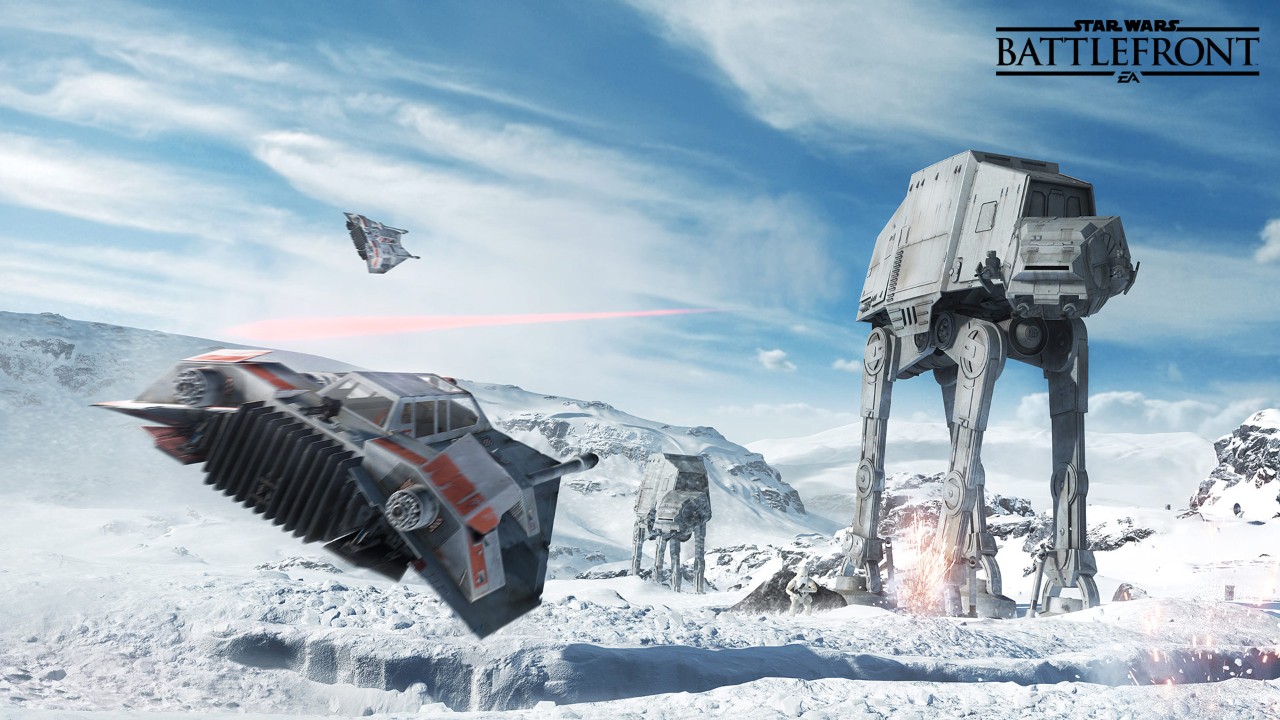 You should know by now what makes a great Star Wars game. Memorable characters, iconic locales, and immersive sounds are all vital to crafting an authentic Star Wars experience. But even with all these elements in place, a game still might not meet the expectations envisioned in players’ minds.

As a fan of the very first Star Wars: Battlefront by Pandemic Games, I knew what I wanted out of this latest installment — immersive, large-scale battles I could spend crushing the opposition with a few buddies. I didn’t need much more depth or variety than that, as long as I would get to don my white stormtrooper armor and wipe out some Rebel scum. But that was over ten years ago; games have evolved, and so have players’ demands.

Star Wars Battlefront is the latest victim to players’ overblown expectations. But while some gamers find its lack of content disturbing, I find this game worthy of the Star Wars name and, more importantly, your time. Your mileage with this game may vary, but if you can manage to rein in your enthusiasm, there’s some seriously good, lasting to fun to be had.

The groan of an AT-AT walker before it crunches a snow drift. The scream of a TIE fighter and its ensuing flurry of green laser fire. The flash of energy as a lightsaber powers on. Yes, even the Wilhelm scream. Capturing the trademark sights and sounds of the original Star Wars trilogy is essential to a Star Wars game. Developer DICE of Battlefield fame has put a stunning level of care and polish into creating that authentic visual and audio experience. Rivers and foliage on the moon of Endor look just as lush as they did in Return of the Jedi, while the shadowed trenches between the dry crags of Tatooine look as though they provide as much cover from the harsh twin suns overhead as from Rebel laser fire. Hoth, Tatooine, Endor’s moon, and new lava planet Sullust all seem as vibrant and real as they appear in the films and trailers.

Vehicles and player avatars are represented faithfully as well. AT-STs jerk about like the stop animated models they were inspired by, while stormtrooper armor manages to look as thin and plastic as the movie props. This is not to say the visuals look cheap — just the opposite. They capture the homemade charm of the original trilogy films while still managing to look real and part of the world.

DICE’s attention to detail is instilled into Battlefront’s every sound. From the explosion made by a speeder bike as it careens into a tree trunk to the blat-blat-blat of X-wing fire, there are audible treats aplenty to be found in every online match. I expected to hear John Williams’s timeless score blaring at every successful capture point, but I didn’t think it was overbearing.

But looks aren’t everything. All the eye and ear candy of Star Wars Battlefront would be for nothing without solid gameplay behind them.

Historically, playing in the Star Wars universe is something the Battlefront series has done well. The big Star Wars battles that thrilled us in theaters translate well to our home screens, and they’ve been fully realized in every subsequent Battlefront installment. DICE’s take on the series continues this tradition with 12 unique game modes that include large-scale battles and smaller, squad-based matches like the ones you’d find in other competitive multiplayer shooters. The deathmatch-style Blast pits 10 on 10 and is as straightforward as online shooters get, while objectives-based modes like Cargo or Droid Run offer variations on classic “capture and hold” modes like Capture the Flag or King of the Hill. Gunplay in these latter modes is frantic and fun because of the smaller player counts. I constantly felt pressured to make sure my actions mattered. Unfortunately, these modes are often underfilled. There is little incentive for players to explore these smaller modes beyond achievement-esque “play as a hero three times in this game mode.” I found they often went ignored in favor of the two large modes.

Battlefront really shines in its Supremacy and Walker Assault modes. Both are 20 on 20 matches with ground troops, vehicles, and heroes duking it out on enormous maps. As a Battlefront fan, these big modes are exactly what has appealed to me about the series throughout the years. Gripping my laser rifle and charging as a nameless soldier (save for my PSN name) into a grand battle is exactly the kind of thing that fueled my childhood fantasies. Death occurs often in these modes, which can lead to some truly unfortunate spawn points. It’s a bummer to spawn in the open at the mercy of long range AT-AT fire. The plus side of that is I was never out of the action for long; the spawns are quick and constant. Rejoining the battle is even better with friends, as you can opt to spawn on top of players you Partner with to get in close to the action (or die horribly if they’re under fire).

Player-controlled heroes and villains make a triumphant return from the series’ previous installment, Battlefront II. Players come across a power up, find someplace safe to activate it, and take on one of the film’s iconic roles. Rebels can become Luke Skywalker, Leia Organa, or Han Solo, while Imperials can choose from Darth Vader, Emperor Palpatine, or Boba Fett. I could take or leave these heroes, as their presence among both the Empire and the Rebel Alliance forces somewhat shatters the illusion that the players are all just low-ranking foot soldiers, duking it out like regular grunts would. The heroes are, however, extremely empowering to play as, and some of my less pathetic kill to death ratios were due to having gotten to play as Luke or Vader.

Instead of waiting for and jumping into vehicles as they spawn as in past Battlefield and Battlefront games, players can pick up vehicle power-ups much like they do for heroes. When the power-up is activated, players are put in the cockpit of X-wings, A-wings, TIE fighters, TIE interceptors, and other classic vehicles. While fun to drive, I never found much reason to channel my inner pilot. The majority of players are all on the ground, as are the objectives which will actually win you the match. And since there aren’t any perks to unlock that can improve my vehicle skills by increasing my rank, there’s even less incentive for me to do so.

Gamers who don’t play well with others be warned. If you prefer to play by your lonesome, there is no campaign story mode, no space opera epic for you to jump into. But that’s not exactly a criticism because there are games that do this better. The Battlefield-style large scale warfare works to DICE’s strengths (obviously). Rather than spend time on some hackneyed story, I appreciate DICE putting their resources into making battles feel urgent and intense. This is compounded with players switching sides after every match, so Rebel players will play Imperials on the next map, and vice versa. It’s a bit disorienting, but it saves the matches from becoming unbalanced due to an overwhelming preference for one side. 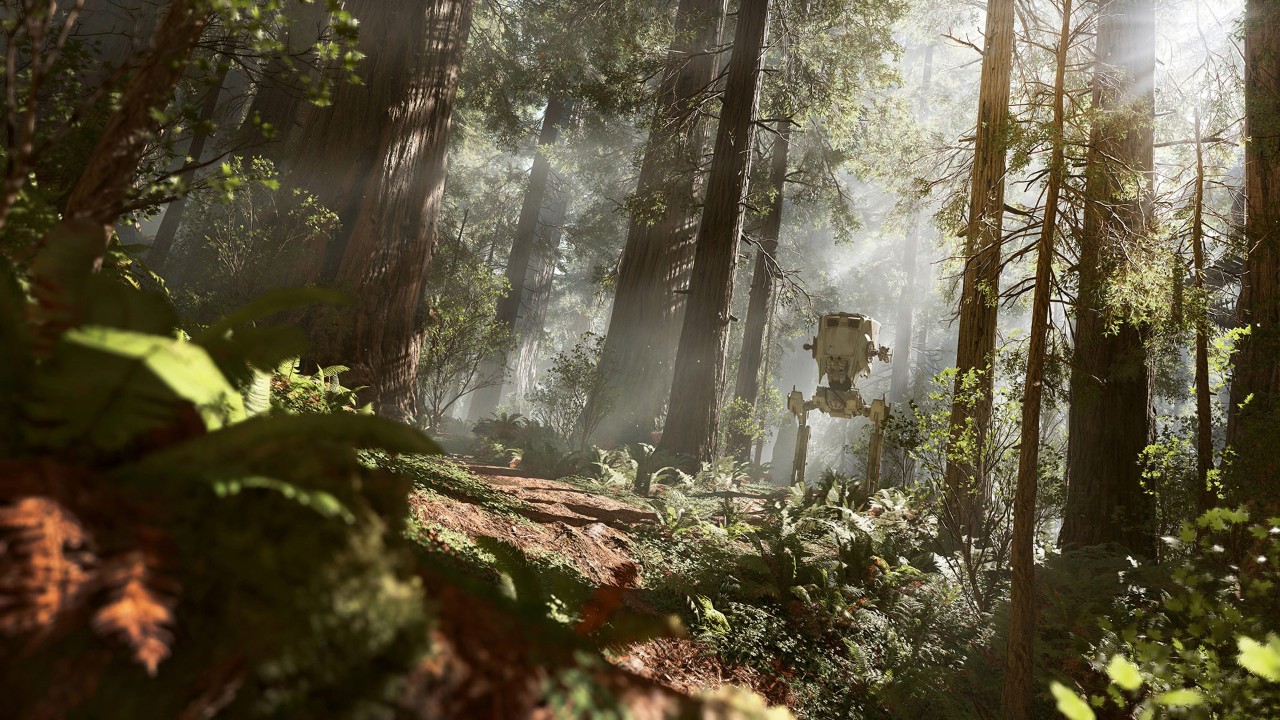 Players looking to spend hours in this particular slice of the Star Wars universe may find themselves getting bored quickly. Battlefront lacks the depth of other online shooters by offering only a few lines of player progression. Players earn higher ranks the more they play, as well as credits they can spend to unlock custom appearances, blasters, and sidearms like thermal detonators. Blasters are the most impactful upgrade, as you can earn guns that are more ideal for taking out enemies at long range or guns that specialize in close quarters firefights. This somewhat thin player progression may be a turnoff for hardcore players, but for more casual players like myself, it’s serviceable. I found myself joining games, playing for an hour or so a night, and settling into a comfortable rhythm. Still, a more in-depth progression system would have done wonders for rewarding players for playing the game. Instead DICE’s Star Wars Battlefront feels like how audiences must have felt when they realized all their waiting over The Phantom Menace was tragically in vain. Although the game looks and feels decidedly Star Wars, the content of the game just isn’t completely up to the demands of a modern player base. With only four worlds and several variations on them per game mode, I could see more dedicated players burning out quickly. And with impending DLC map packs already out (with more on the way), this just seems like a rush job to get out the door before The Force Awakens releases.

A few more minor gripes before we close out this chapter. “Immerse yourself in your Star Wars Battle Fantasies” — that’s what the box says. Well, I hate to break it to them, but a bunch of stormtroopers running around without their helmets on has never, not once, been a part of my ideal Star Wars experience. I understand the feature is simply a part of the rather thin progression tree built into the game, but it’s the only example I can think of where Battlefront’s catering to the casual gamer works against them.

The first Battlefront seemed to have been released a long time ago, in a galaxy far, far away. Fans of that first game may not find this modern version to resonate with their ideal vision for a Star Wars shooter. But that’s true for the movies too, isn’t it? We saw this with the prequel films, where creator George Lucas’s vision for his series did not match what fans imagined.

It’s true that this Star Wars Battlefront could have been so much more. But it could also have been an afterthought, a speed bump to carelessly pass over as the Star Wars hype train continues on its merry way to the box office. It is obvious from a single Supremacy match that an amazing amount of attention has been put into creating an authentic Star Wars game. It might not be the definitive Star Wars experience, but it more than suffices for what it’s trying to do. And that is why, as long as you don’t look too closely, it is a force to be reckoned with.

NitWitty Verdict for the Hardcore Fan: Not Fully Operational

NitWitty Verdict for Casual Players: You May Fire When Ready 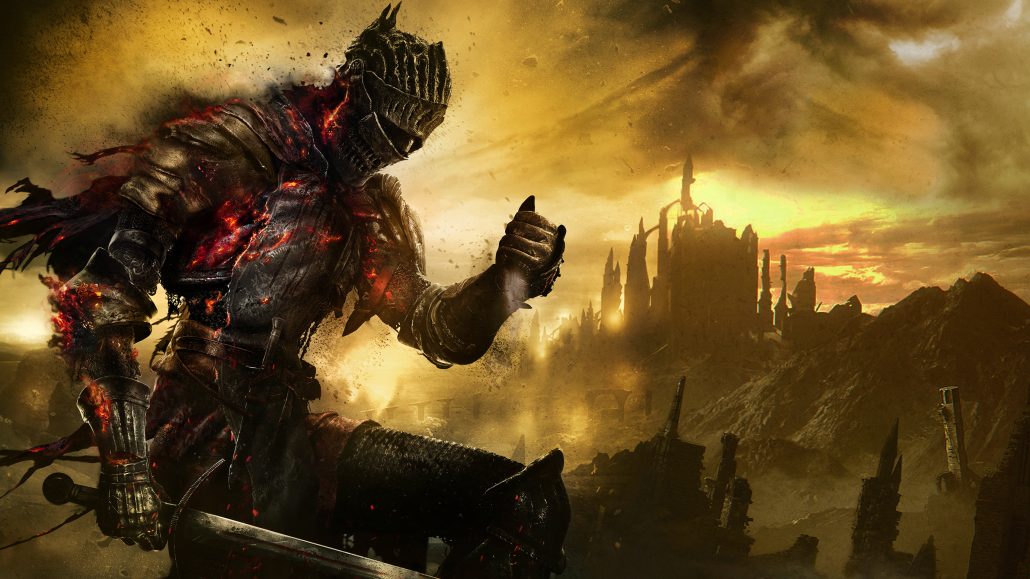