Somewhere along the way, the Ghostbusters became a thing.  But honestly I never understood why. The original is quotable yes, but the actual movie is often uneven and the less said about the DOA sequel the better. Yet it found this particular niche in the zeitgeist that, deserved or not, it has inhabited since 1984. The specific phrases of “Who you gonna call?” and “No human would stack books like that,” have been burned into our collective subconscious and now the Ghostbusters are part of our culture. If I’m being perfectly honest I don’t have any kind of particular love of the original 1984 film. It was good, but for many people that are my age these weren’t the Ghostbusters: 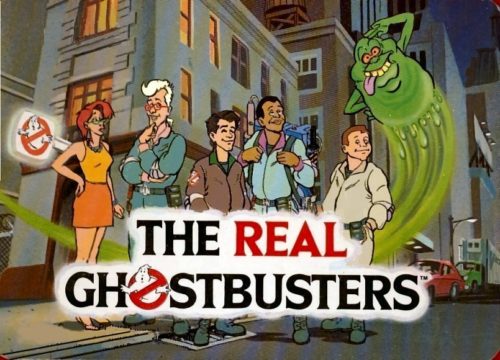 I remember thinking some very odd things when I finally watched the 1984 Original. Crazy thoughts like, “Why are they trying to trap Slimer?” and “Why are they all wearing the same color outfits?” Coincidentally, when the internet seemed to lose its mind over changes to their beloved “canon,” in regards to the new Ghostbusters I had to ask another crazy question – “which canon are they referring to?”

Yes, in the year of our lord 2016 the universe has gifted us with a brand new Ghostbusters, and not just a sequel, but a proper reboot with a new cast. Of course, when the heralds declared that a fan favorite would return comet-like after a 30 year absence, the fans responded as they are wont to do: they simultaneously threw a tantrum and their own shit like chimps. The original cast of 60 year old dudes were not the stars, oh no, now it was a collection of girls who we’ve known since the 2nd Grade have cooties. At this point “fans” are getting ridiculous. On one hand, I don’t even want to bring this up. It’s not critical nor valuable, it’s just juvenile. And yet, this is the nonsense that the internet mucked up when this new Ghostbusters project was first announced. Ground zero was the the trailer, which quickly the most disliked thing in the history of YouTube. Mind this was before anybody had even seen a frame of film and included comments like: “When are people going to learn that women aren’t funny?“ To me, calling out a film that doesn’t even exist based on the cast has wafted with the saveur of sexism from the start.

As a critic, it is not my job to fix the problems of insufferable fan-boys. As a male writer, it is also not my place to speak on concepts of girl power and strong female role-models lest I find myself in the unenviable position of mansplaining feminism. In the end it must always be the work that does this, and I am of the opinion that the new Ghostbusters makes a strong case for itself and for continued films. Just to get this out of the way, the movie is good and if there are going to be sequels I would be far more interested in those than anything by the original cast.

At its salted caramel core, Ghostbusters is a reboot, pure and simple. The film that it reminded me of the most in these aspects was another reboot where the lead was switched to a female – Star Wars: The Force Awakens. Yes, that is a reboot too in all but name. In both cases they take the original films and they play fast and loose with the tropes, plot, and characterizations while keeping the slow second act. While Star Wars basically played out it’s key story beats as some sort of New Hope/Return of the Jedi mixtape, Ghostbusters tends to take the alternate tack. It is more concerned with telling its own story than slavishly following the original. Instead when it does meet up with the original ideas it’s for well placed cameos and to (appropriately enough) crack jokes. An early example features the crew looking for a base of operations and seeing the iconic firehouse, and then discovering that NYC rent has gotten prohibitively expensive.

When it comes to the plot, there are particular story beats (giant monster at the end, ghosts escaping into NYC, a possession played for laughs) that match up with what audiences would expect from a Ghostbusters film. But the plot is far easier to follow than the 1984 original, and makes smart use of the mythology and technology of the universe to make the tale pay off. Coincidentally, the villain is not some weird extraplanar force but someone who uses equipment similar to that of the Ghostbusters themselves. This tweak gives the series an actual villain in the form of Rowan Norse – an occult obsessed scientist who wants to harness the power of the nether realm. Giving the cast an actual person to play off of is something that really sets this version apart and makes the plot more than a series of weird coincidences that eventually lead to a giant Mr. Stay Puft.

Tonally, Ghostbusters is exactly where it wants to be. As a series one of the defining traits of the Ghostbusters is that they deal with frightening things, but their deadpan reactions lighten up the tone and in context are really funny. I’ve written before about how a filmmaker can use tone to create a fun juxtaposition and make the sad things sadder and the funnier things more humorous. Taken as a horror film, none of the Ghostbusters films would stand up, and as a straight comedy they err on the dry side. But the genius of the series is that it mashes the 2 genres together to create more than the sum of its parts. The new Ghostbusters nails this aspect by creating a world where there are truly terrifying things floating around, and then makes a joke about it. An early scene has the first appearance of a ghost, and Holtzmann can’t stop eating Pringles (aka “salty parabolas.”) It’s simultaneously awkward, frightening, a throwback and funny all in the same beat.

The cast (which like the 1984 original features multiple SNL alumni) is quite good and manages this fine line really well. The core of Melissa McCarthy, Kristen Wiig, Leslie Jones and Kate McKinnon each bring something unique to their characters, and watching each of their distinct comedy voices mix together is a minor joy. Much like the original, I would be happy just to watch these people hang out for 90 minutes. That they have a plot to react to is mostly a bonus since the writing is so good.

And! In spite of what the Internet says, the fact that they are all ladies is irrelevant. However, there are jokes that can be made explicitly because of the all female cast. The biggest example is their receptionist Kevin, who is characterized as awful at his job, a shocking idiot, and ridiculously good looking. But the movie is happy to play with gendered tropes and has Dr. Gilbert act skeevy and awkward around him for being attractive. The thing is, if that joke played it the other way of having a dimwitted woman and an awkward man who is attracted to them, that joke just doesn’t work in 2016. In this case it works explicitly because the premise is subverted, and the new Ghostbusters is full of those kinds of re-directions.

What the film doesn’t do is use the gender of the Ghostbusters in an attempt to raise the stakes. There is no Final Girl situation, nor is the danger ever played as anything less than genuine. In effect, when it comes to the horror, or the action, the film acts as if the Ghostbusters are gender neutral for all intents and purposes. They’re not just men or women, but brave, wisecracking heroes.

The new Ghostbusters is far from a perfect film, but it is a very good one. It’s good enough that there are people for whom this will be the definitive version of, and entry point into, the concept and franchise. It’s also likely that there will be little girls who might see these women and think that they can be scientists and bust ghosts too – and that’s not bad. Then there are people that might squawk and say that this is some kind of PC Police role reversal and it’s a harbinger of the downfall of western civilization, and marks the disintegration of classical gender roles.

But fuck those people.