We’re off all week, but that just means that we get to share some of our favorite pieces from Volume 1 of NitWitty Magazine. In this installment of Mangaka Masterworks, we feature a manga about childhood that has a very special place in Jordan’s heart. Enjoy.

This month’s Mangaka Masterwork is all about that sweet, sweet, feeling of nostalgia. With the ushering in of another new year, we look not only towards the future, but remember the past and celebrate all the years that have brought us to the present. Nostalgia is a part of that remembrance. For me that feeling is about family. It’s a bittersweet callback to a world when everything was simpler, and a good day was a day I spent playing with my brother or mother or dad. It’s about those quiet moments that only took a second to pass but are forever burned in memory. Each and every one of them trigger for that warm fluffy feeling that this month’s issue is all about. Which brings us to Kiyohiko Azuma’s Yotsuba&! – a manga that spends its entire story exploring the bits and pieces that create that lingering sense of nostalgia. 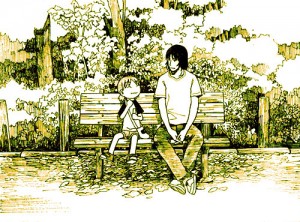 Yotsuba&! tells the story of a single father named Koiwai and his young daughter Yotsuba. It begins as they move into the city from the countryside and starts with Yotsuba’s first reactions to everything and everyone around them. If the premise seems a tad bit dry, it’s because it is. The overarching narrative follows Yotsuba as she adapts to her new home and circumstances and makes new friends. There is no super powers, fist fights, explosions, or wild romance . There is a young girl and her father and, from a child’s point of view, a world of unknown and exciting things. While the structure of the story deceivingly mundane, the actual story isn’t. Azuma finds the humor in the mundane moments of everyday life and, through Yotsuba, invokes a sense of nostalgia and longing that is almost impossible to resist. 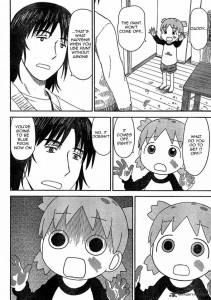 The volumes of manga do not tell a perfect overarching story but rather function as bundles of events that take place in Yotsuba’s everyday life. From her first time at school, to her very first camping trip, the manga follows Koiwai and Yotsuba as their family grows up. The driving force throughout is undeniably Azuma’s genius sense of comedy. Yotsuba&! is hilarious. By drawing on relatable moments and circumstances Azuma amplifies the hilarity of childhood. In the very first volume Azuma introduces the story’s cast of characters through a chase scene that is set in motion by several of Yotsuba’s childish misunderstandings. After quickly getting bored of unpacking, she sets off alone to explore the city neighborhood they have moved to. Koiwai is not panicked by her disappearance, he seems to have been expecting it.  While finishing unpacking he meets Ayase, the middle daughter of the neighbors next door. While riding home from school on her bike she notices her new neighbor and comes over to introduce herself. After they talk for a bit Koiwai tells her that his daughter has disappeared, to which she panics for him. He laughs and tells her not to worry, just that if she meets a “weird” little girl to tell her to come back home. This small interaction is simply dripping with nostalgia. I mean, his physical description of Yotsuba as “weird” and his nonchalant attitude at her disappearance may as well have been lifted from my own family’s childhood woes. I was that kid and my parents were most definitely like Koiwai. When I first picked up the book at Barnes & Noble I was smiling and laughing through the entire first act. It was a scene from my childhood, almost word for word.

After Ayase leaves Koiwai she sets off on a journey to look for Yotsuba. The story then shifts from her perspective to that of her younger sister En. When En passes the local playground on her way home she notices a small girl fiddling, almost confused, with a vacant swing set. The little girl twists the chains up and manages to hit herself in the face with the wooden seat. En seeing this, rushes over to help her. Of course this young girl is Yotsuba and this is her first time seeing a swing. After learning what the strange device is her attitude quickly shifts from pained to joyous as she sits on the swing and demands that En push her. After a few small pushes En turns to leave, and only manages to take a few steps before she looks back as Yotsuba is now swinging almost parallel to the ground laughing as she flies back and forth. En yells to her in a panic to hold on tight, to which Yotsuba does the exact opposite and lets go of the chains. On her return swing she sails out of the swing and lands in the sand pit okay but very scared. This entire scene is a masterwork of physical comedy. Yotsuba’s facial expressions are absolute gold and it’s almost eerie how relatable Azuma makes the whole experience. My laughter was half directed at the story and half at my own personal memory of a similar swing accident. I loved swings as a kid. I remember my time spent in jumping wars with friends as if it was yesterday. I could almost make out the features of my own face in Yotsuba’s as she went flying from the swing seat. While reading through the passage I was hit by an overwhelming sense of nostalgia and longing. I mean, what I would give to ride a swing for the first time again. To experience the thrill (and terror) of jumping from what seemed to be a death defying height. To tell you all the truth, it was this small moment in the manga that convinced me to not only buy the first volume, but to buy the eleven that came after it. The beauty of Yotsuba&! is its effortless mixture of nostalgic callback and comedy. The scenes are seamless; each small moment is it’s own self-contained story and experience.  All of which link up, ultimately amplifying the comedy and making the entire process laugh filled and relatable. 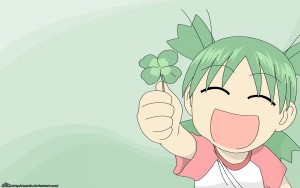 Azuma’s Yotsuba&! can be summed up with its opening sequence. If you are looking for anything more, then this might not be what you are looking for. But if you are like me, and some small part of you identified and laughed, then Yotsuba&! is a work of art that stands at the pinnacle of manga. It is a master’s course in utilizing nostalgia to make joke after joke and tell an amazing, heartfelt story. Every page is brimming with childhood longing and adventure. For the few days I spent reading the manga I was transported back to that simpler time. When my brother and I found joy in the simplest things and every dark bush or tall tree was an adventure. Yotsuba&! is the perfect read for the new year, it treasures the past, and preaches a powerful lesson for the present: Don’t let those quiet unassuming moments pass you by unnoticed, there is laughter and love in every waking moment.

Rediscovery of an Icon: Tomb Raider

August 24, 2016 Eric Seal Comments Off on Rediscovery of an Icon: Tomb Raider