Springtime really is the best. Nestled as we are between the the spring fertility festival last week and the upcoming first of May, it’s really a wonderful time of the year. If I said anything last time about the holiday season being the best, I was obviously lying then and being totally truthful now. Either way, just in time for our humor issue, there’s a new Magic set called Shadows Over Innistrad that features zombies, vampires, and delirious madness because the calendar obviously doesn’t care about our theme this month. The usual caveats apply. Namely these are not the cards that are going to let you brutalize any and all competition that gets in your way. Instead these are the ones that seem the most likely to encourage unique gameplay and help you have a good time at your upcoming prerelease. Afterwards I’ll do the customary All Star shaped follow up where we have another look at cards that may look odd, but are really oddly awesome.

Right then, let’s get started with a brand new reprint. Here we have Fiery Temper, a card that features a mechanic in Shadows Over Innistrad – Madness. Like the card says, if you are forced to discard the card you can pay the cheaper cost for the effect. For a card like Fiery Temper, that’s just a very small hoop to jump through before you get to throw a Lightning Bolt. 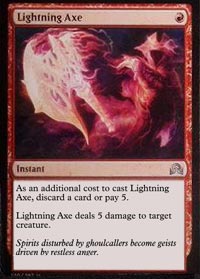 For 3 it’s not gonna win any awards, but if you can get that Madness cost working, then you’re going to be golden.

If you want to get really saucy you can combine it with something like this:

Basically, the discard on that isn’t really a downside if the card you discard has Madness. Stick this one-two punch together and you’re on your way to paying just RR for 8 damage, which the last time I checked was pretty damn good.

Moving on we encounter another one of the new Shadows Over Innistrad mechanics. In this case it’s Delirium. For this one it counts the types of cards in your graveyard. So if you have a creature, an instant, a land, and a sorcery in your graveyard it turns on a bunch of your goodies like Topplegeist over here. A 1/1 flier for one isn’t bad, and that ETB effect is nice, but if you can add the missing pieces to your graveyard this will go from being mildly annoying to a lockdown of whatever their biggest guy is. Normally, that would annoy me, but consider that you could always do something like sacrifice a land, or disenchant one of your own enchantments to turn this on, and that makes for some interesting, outside the box thinking. 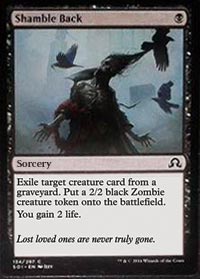 Then again, maybe you just want to also make a bunch of zombies and offer up your opponent as an all you can eat brain buffet (you know, like the one at Caesar’s). If that’s the case we have spicy little cards like Shamble Back. The biggest downside is that it needs to hit a creature, but late in the game you’ll have a bunch and they might too. However, where this card goes from just “meh” to “wait, what!?” is that you can turn off Delirium effects with it. If they only have 1 creature in their graveyard, you can use this to remove it, deactivate their Topplegeists and get a zombie out of the deal. It’s also a sorcery, helping you get to 4 card types. Plus (!) you get 2 life. There’s a lot of clever that can be had for just 1 black mana. 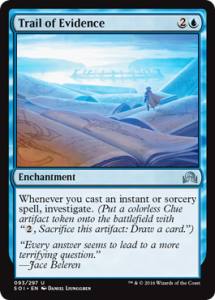 Here we have the enchantment Trail of Evidence which I’m using as a placeholder for the Investigate mechanic. I’m torn on the mechanic as a whole since it seems it can be durdley, but it seems like it could create some interesting situations given which card is making those Clue tokens. So for Trail, this turns into an exciting little draw engine that basically says, “Hey, for 2 extra mana all of your instants and sorceries become cantrips.” A nice bonus is that this should trigger off of your Madness cards (if they’re the correct type). What’s really interesting about the Clues is that they hang around for a while, so having a whole bunch in play creates a lot of potential card draw as you run out of gas. I’m curious how this mechanic plays, although at least for Trail of Evidence it might be powerful enough to see some constructed play down the line. 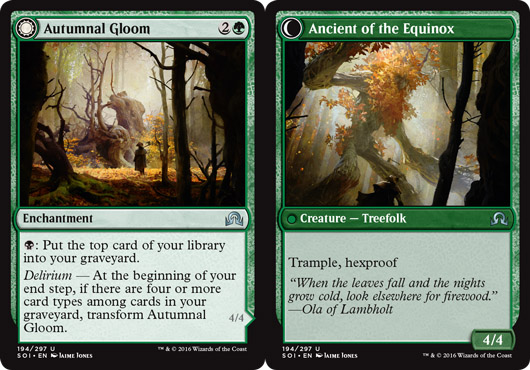 Finally we have what might be one of my favorite cards in the set. Shadows Over Innistrad marks the return of transforming Double Faced Cards. If you missed out on the last Innistrad you may have not gotten the chance to play with these, and that is a damn shame. For Shadows, the developers went ahead and created Double Faced Cards in which the sides are not both creatures. Ancient of the Equinox is one of those. If you happen to be running mono-green, this is basically a 4/4 Trample, Hexproof creature for the rock bottom value price of 3. Yes it needs Delirium to do that, but it’s still not a bad deal late game. Of course for the maximum value, you’re going to want to be playing green and black. If that’s the case then this enables you to mulch through your deck and get Delirium online. I can see a player being attacked for the win, and dumping all of their black mana into this just to trigger the 4/4 that can save them. That’s some good gameplay right there.