Is there anything that isn’t great about summertime? The weather is amazing, the days are longer, and since the sun’s out – guns out. If I ever said anything about a different part of the year being anything other than a wild disappointment, I had clearly missed taking my meds. This month there’s a new Magic : The Gathering set coming out – Eldritch Moon. Unlike last time, the set features creatures from beyond space and time, unknowable and alien intelligences, and has the word “Moon” right in the title – which means that it’s on theme this month.  As always we’re going to look at these new cards not with the intention of picking what’s going to be the new hotness. Instead these are the cards that seem like they’ll be the most fun to play and that you’ll actually open (so commons and uncommons). No matter how you do, next time we’ll take a look at the stuff that looks bad hanging on the rack, but brings all the boys to the yard with our customary All Stars. 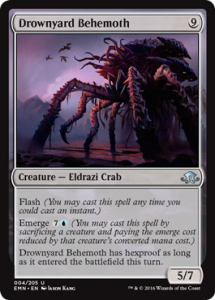 Let’s get this party started by looking at some crabs. Yeah, that’s right – Drownyard Behemoth is a giant Eldrazi Crab. Like other Eldrazi, it’s expensive, but unlike the rest of them this one is probably good eats. If nothing else, the ability suite is tasty. It’s a 5/7 with flash and has hexproof on the turn it comes down. But it’s the Emerge ability that’s really fun. Basically you can sacrifice another creature and get a reduction to play a Drownyard Behemoth based on the casting cost. It’s slightly complex but to put it in simple terms if you sac a 5 casting cost creature, you can play this for 2 and 1 blue mana, which is so much value it’s absurd. What I really like about this is that it has Flash, so you can sac a creature in response to it getting killed by something else. So unlike that time on Spring Break, this is a crab you’re going to want to catch. 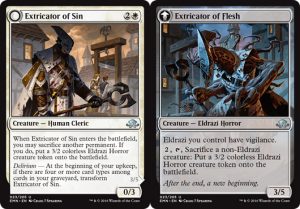 Next up we have the new return of double faced cards. Shadows Over Innistrad featured new kinds of DFCs with alternate activations, and Eldritch Moon changes the formula up by creating weird Eldrazi hybrids. So Extricator of Sin here lets you sac a (preferably small/useless) dude to make an Eldrazi Horror token when it comes into play. Later on when you’ve flipped it can trigger that ability whenever you want, making removal more worthless than a liberal arts degree. What’s fun about these is that since the front of the card isn’t filled with text about flipping it, there’s room to have a lot of weird abilities like Extricator of Flesh has. It’s twice the excitement, unless you’re the poor bastard getting sacked. 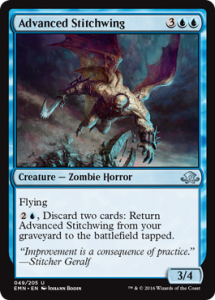 In Shadows Over Innistrad, one of the returning mechanics was Madness. It basically let you play cards at a discount if you would have discarded them. Eldritch Moon is full of ways to discard for the the lulz. Advanced Stitchwing  is a great example. First of all it’s a 3/4 flyer for 5, which is very not bad. But the saucy text is what makes me feel weird in my bathing suit areas. If you discard it (to pay another cost perhaps) you can discard and get this flying beat stick into play as early as turn 3. Late in the game it can power out Madness cards by being a discard outlet. Did I mention this can happen as a fast effect? ‘Cause it can. Heck, you’re living the dream if you can discard 2 Fiery Tempers and deal 6 damage and get a 3/4 flyer for 5 mana. The proper response to such a scenario is “Spoosh.”
Black gained some new toys as well, although the real money is if you manage to open up a Collective Brutality. But there’s some other fun stuff that black can do due to the presence of a giant tentacle monster. One of the new mechanics is Meld, which is a transform mechanic. So if you have both parts in play they flip over and reveal their backs, which make a giant card. 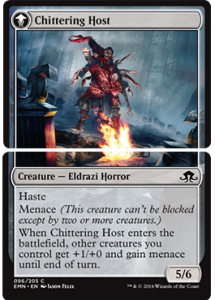 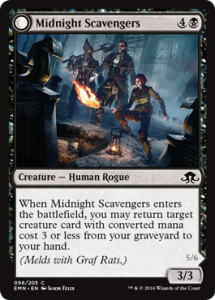 I know, cool right? I mean it sucks to be them, but turning into a 5/6 menace creature that probably ends the game on the spot is pretty good. A couple of things to be aware of. First of all is that the giant Voltron creature still counts as 1 creature, so you can still Murder it. So be aware that you can get 2-for-1-ed in certain circumstances. This set in particular is something you’re probably going to see at a prerelease, since all the pieces are commons. There are other ones that use rares and mythics, but let’s be honest here – the odds are not in your favor there. Instead try to pick up a set of those for your Commander deck and swing away. 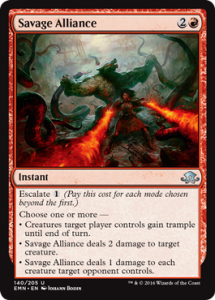 Another spicy new mechanic in Eldritch Moon is called Escalate. It’s a modal spell and functions a little like a charm and has a menu of abilities for the discerning player to make. Unlike something like Mardu Charm, for a little extra you can use multiple effects. For a card like Savage Alliance, it’s a burn spell, or a trample enabler, or a token clearer. Or for the low, borderline free, cost of 1 more you can get 2 of those abilities, and for 2 more you can make it a meal deal and get the whole combo. The only thing it doesn’t come with is a drink, because if you have creatures on the board you should have no problem drinking your opponent’s milkshake. Don’t underestimate the power of dealing 1 damage and then trampling, since the damage doesn’t go away; it just changes the trample math. So if I attack with a 5/5 and you block with your 2/4 that’s already taken a damage, then it’s functionally a 2/3, and 2 damage is going to trample right over to the face. So many options and all of them are good. 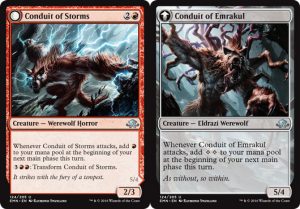 Because we’re still on Innistrad, werewolves are making a return and this time they’ve gotten a little weird. In the last set, werewolves would transform based on the number of spells that were cast. If an opponent didn’t cast any spells, then your doggies got let off the chain. With Eldritch Moon, the werewolves have different transform triggers, like Conduit of Storms. Now many of them have mana costs to transform, and then stay on the angry side. These puppies never calm down. 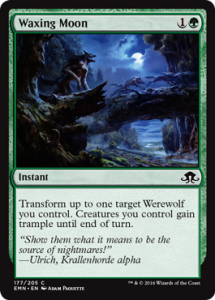 Getting mana after attacking is pretty great, since it can help you ramp out a 5 drop on turn 4 or transform a turn early. But they’re still werewolves and if you have something like Vildin-Pack Alpha they come into play already transformed. Or you can just use something like Waxing Moon and flip them for 2. Of note when you’re playing this (and if you’re running with the werewolf pack – you should be) is that it says “up to one target” which means that you don’t actually need a werewolf in play and can instead just give your team trample. 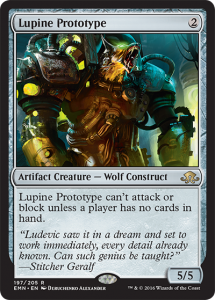 Finally, we have something really special. I usually don’t feature rares in this series because the odds of getting a particular rare at a prerelease are pretty low. But I feel a compulsion to make an exception this time for Lupine Prototype. Look, I don’t know if it’s a great card (although a pretty good top-deck late) but it’s a giant wolf-dog inside mech armor. It might be part of some janky combo deck, but if there’s anything in Magic more fun than attacking with a Robot Hound I haven’t found it yet.

Either way, don’t forget that the Eldritch Moon prerelease is going to include some packs of Shadows Over Innistrad and is also going to be full of madness, mayhem, insane angels and non-sparkly vampires. Hopefully it will also include you, and I’ll see you there. Then once the dust has settled I’ll be back to talk all about the Eldritch Moon All Stars.