It’s time for another Magic prerelease and it’s time for Nitwitty Magazine to present the sorts of things that look like they might be a lot of fun to play with. There are lots of other sites out there somewhere that will probably be super happy to tell you how to lay waste to the competition at your Local Game Store. We’re not here to do that. Since sealed deck play is highly contingent on opening up quality beats, a Prerelease is usually not about playing the best possible deck. Instead I’m a firm believer in playing the cards that look the most interesting. Or cards and interactions that have the possibilities for interesting things to happen. After the prerelease I’ll do a post game report with the the opposite – cards that look bad but play great. Now, I am not saying these are the best cards in the set, because they’re not. But odds are you’ll have fun playing them even if you lose. 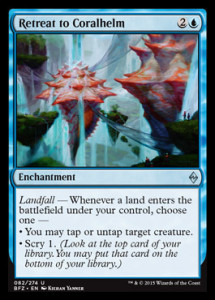 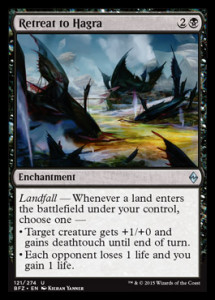 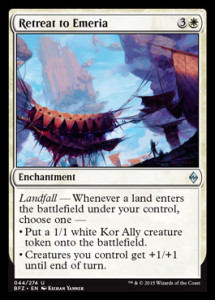 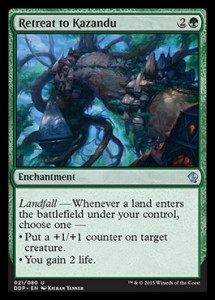 Today we get to start off with a cycle and there’s a couple of very exciting things that these little brutes are going to do for you. In most sets the most boring thing you can draw is a land, but since this is Zendikar that’s not true. It’s cards like these that make it that way. If you have one of these in play every land you play turns into a charm. So even late game drawing into a Mountain isn’t going to make you groan. Instead it’ll make you think about which creature you don’t want blocking, or which one of your dudes is going to go all Hulk Smash. Either way these are going to make 35%+ of your deck (all the land) more interesting.

As a bonus they’re just uncommon so the odds of one of these popping up in your card pool is pretty high, and the odds you play against them will be pretty good too. Maybe even good enough to maindeck some enchantment removal if you want to be a bit of a killjoy. 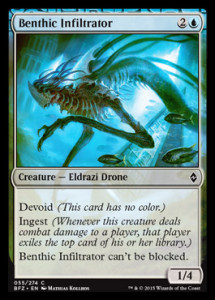 Next up we have Benthic Infiltrator. There’s a couple of weird/interesting things going on here. To start, check out that quality 3 mana casting cost and that 4 toughness that allows it to arrive early to the party and stay late. Devoid is just confusing here but that whole “…can’t be blocked” is one of those phrases that makes Magic players start dreaming impossible dreams.

For my dollar the hotness on this card is that Ingest trigger. Basically, tied together with that unblockable clause it allows the rest of your Eldrazi posse to have things to eat/process. If you wind up in Joy Land and you managed an Eldrazi deck from your pool I’m pretty sure that Mr. Infiltrator here was in it and made the rest of the deck work. Something else to consider is that since there is a short bus load of life gain in the deck, the Ingest mill strategy may actually be something you can threaten, and pulling a win that way usually makes for a good story. 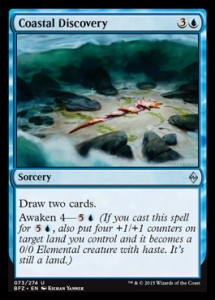 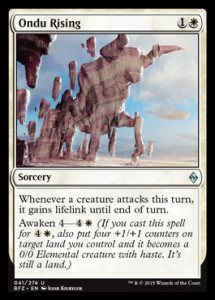 Speaking of doing things that both seem strange yet feel great (the whole point of Spring Break really) these Awaken cards are something you’re going to want in your life. My bet is that these two probably have the best chance for something stupid fun to have happen. Coastal Discovery is going to do things that you already want to do (draw a bunch of cards) but if the game is a little longer you get to make one of your lands get in on the beatdown.

Ondu Rising is gross for so many reasons. First, it has the ability to make everybody on your team a lifelinker and it only costs 2 mana. This basically is tacit permission for aggro decks to go find a dark corner and fuck themselves. Then, if that wasn’t enough for you, starting on turn 5 it can do all of that and make one of your lands a 4/4. Of course that land will also get lifelink as soon as it attacks so you can swing with your lands for fun and profit.

Something to consider with these is that Awaken puts counters on your lands, and makes them creatures too. But, they’re still lands so you can target a land that is already “awakened” and stack the counters. So there is always the possibility of breaking somebody’s ass with a 24/24 swamp. 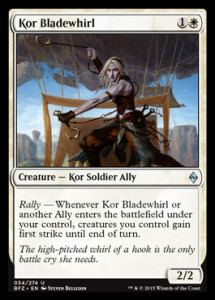 This is a Kor Bladewhirl. Ms. Bladewhirl here is probably very happy to gather up a bunch of friends and deliver overnight express pain. There’s probably a multicolored ally deck that wants to happen in this set. Most of those Allies have enters the battlefield triggers or trigger when another ally pops into play on your side. If you can support it the archetype might be sliver-esque and slivers are always a good time.

This is another example of making all of your draws interesting. You may have a deck where the very act of playing another ally will trigger a whole bunch of abilities and probably win you the game outright. Maybe it’s just me but I like to gleefully point out every trigger with a smile on my face, before turning a bunch of dudes sideways and sending them into the red zone. 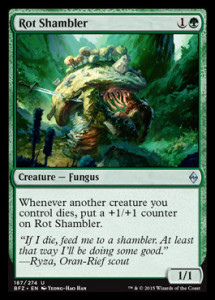 Do you hate when your stuff dies? I know I’m not a big fan of it, so when I see something like Rot Shambler it makes me smile. In the early game this little beast starts off small enough that most people won’t waste removal on it, and then late game (if it came out early) it may be too big to deal with. Another plus is that it makes combat math really awkward if there are any first strike creatures on your opponent’s side. Since their first strike will kill your guy and make McShambles over here bigger before he hits. 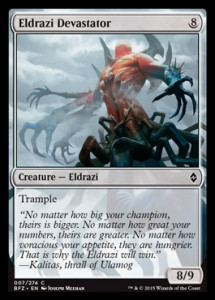 What? Eldrazi Devestator is the perfect example of a Big Dumb Object, only this is an object you can beat face with. Not all of these entries have to be clever. Sometimes all you want when everything looks like a nail is to have a truly enormous hammer. He’ll almost never see play in constructed formats, so why not play him now? Exactly. 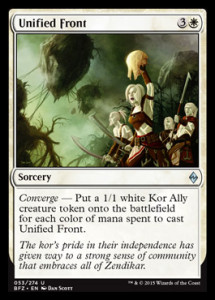 United Front is just stand in for the Converge mechanic in general. I sorta want to screw around with a 4 color deck in this set and its cards like this that encourage it. While at first glance this looks kind of bad, notice that it makes allies, and other allies you may have in play undoubtedly have text that says, “Whenever another ally comes into play.” So you really want to read this as, “Pay 4 different color mana and trigger all of your allies 4 times.” It might be fun, and it might be hot garbage, but I’m willing to lean towards fun. 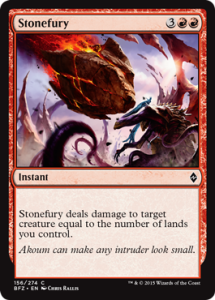 This is Stonefury, and it’s telling you to go ahead and play 20 lands in your prerelease deck. Just do it. See how high you can make this number and then see if you can make one of those Eldrazi Devestators go spat. 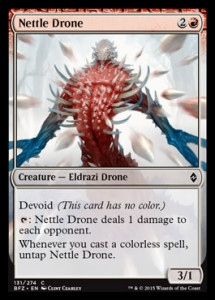 Finally for today we have Nettle Drone. This card specifically wants you to play as many colorless things as possible. Colorless sounds weird. Weird is good because it’s new and new is fun. I’m curious if players end up in colorless and rainbow coalition based on what they open. I’m sorta hoping for all Eldrazi in my packs so I can say, “dead Cthulhu waits dreaming” constantly. The odds of it happening are reasonably small, but like the Great Old Ones, I can dream.

And that’s what I’m hoping to play around with down at my local game store. If there’s something you think is awesome that I missed let me know in the comments. Otherwise I’ll be back for a post game report on the cards of Battle for Zendikar that were All Stars but at first glance looked like ass. 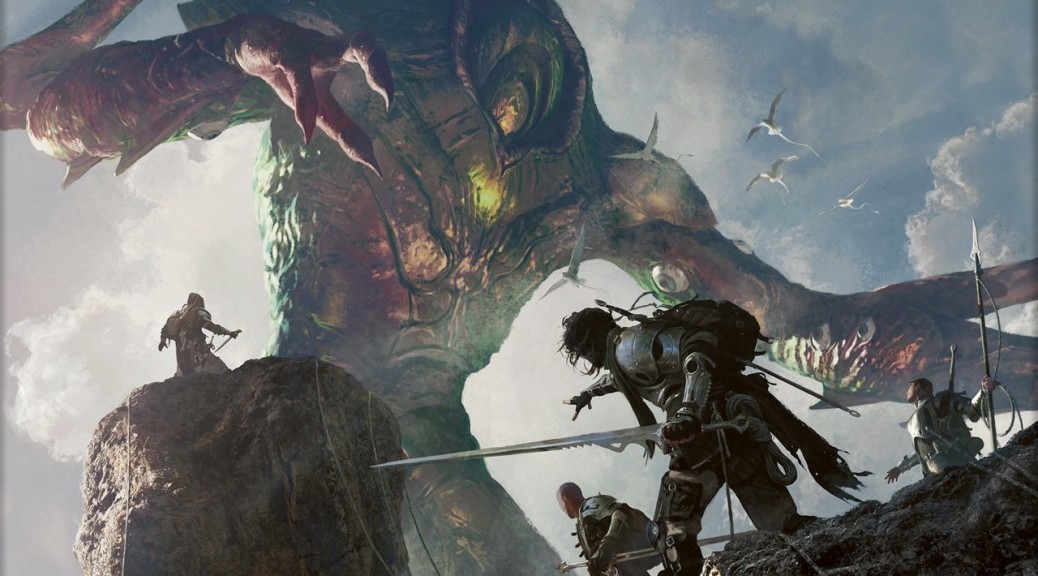 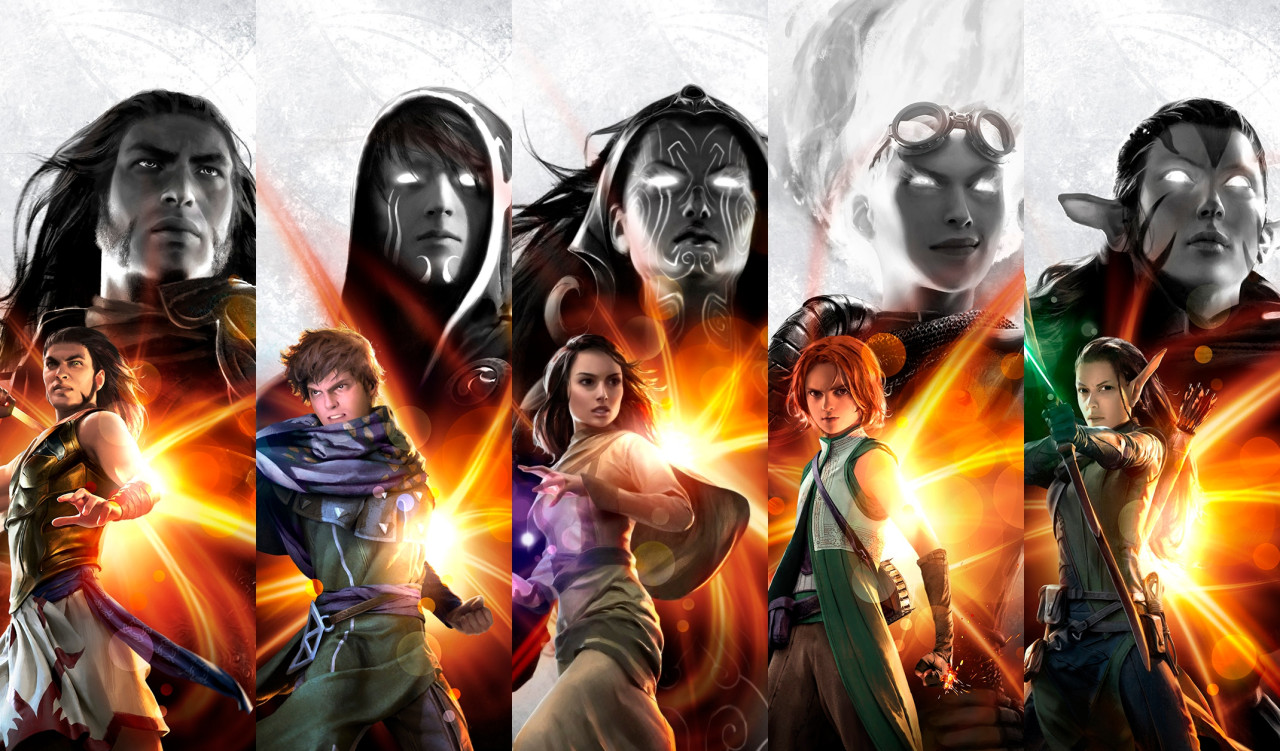 August 1, 2016 Eric Carr Comments Off on NitWitty’s Inside Man: Magic the Gathering Regionals