It’s a great day today, because it’s the time of year that a brand new Magic set is coming out. Yessir, this weekend is the prerelease for Kaladesh, featuring all kinds of wacky artifact based goodness, and we are leaving the sad, horrific, Eldrazi infested land of Innistrad behind just in time for Halloween. Look, sometimes the calendar matches and sometimes it doesn’t, that’s just how time works. Anyway, Kaladesh looks like it should be a fun set, if only because it is the first set since Journey into Nyx that isn’t super grimdark. Of course the actual mechanics look like an imperial shit ton of fun too. As always, the cards I’m showing here probably aren’t the strongest, but are very likely the ones you are going to have the most fun with. After all, there is an entire season of Standard to play the good stuff, so go ahead and give yourself a pass to play the fun stuff. Later, we’ll come back and get into the things that look bad, but play amazing in our follow up All Stars article. 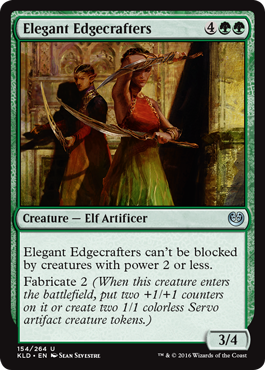 Let’s get this party started with Elegant Edgecrafters, a card sure to be sent into the red zone an awful lot. At first blush it doesn’t look like something really fun, but this card features one of the new mechanics from Kaladesh – Fabricate. As a gamer and designer, something that I always look for in games are meaningful choices. Basically, it’s easy for a game designer to make a player select from a massive menu of things to do, but if none of them make any difference on the game, it’s less relevant than the US Men’s Soccer Team. Fabricate is actually a lot more interesting because it actually does something, like on Elegant Edgecrafters here. When it comes down it can either be a 5/6 that is hard to block and bashes face, or it rolls up as a 3/4 with a posse of 1/1s. The best part is that you get to choose based on what you need at the moment. It’s meaningful and these are super flexible. Need to block? 1/1s. Need a giant? 5/6 then. Have a spell in your hand like Inspired Charge? You definitely want to bring the brute squad. Either way, sounds good to me. 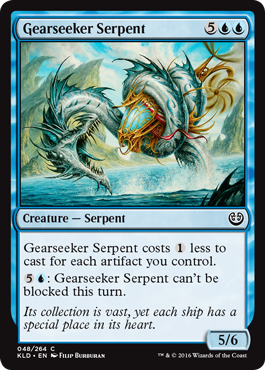 Next let’s have a look at a dude that has fewer interesting choices, but it is still going to make you a very happy camper – Gearseeker Serpent. Okay, so back in the day there was this sweet mechanic in Mirrodin called Affinity that was super broken. It was on stuff like Myr Enforcer and let you pull cray cray shenanigans like dropping a 7/7 on turn 2. I’m not going to say that Gearseeker Serpent is going to be degenerate, but you should throw this in a deck and hope to one day live the dream of casting it for 2. At which point, go ahead and make it unblockable and apply directly to the sternum. 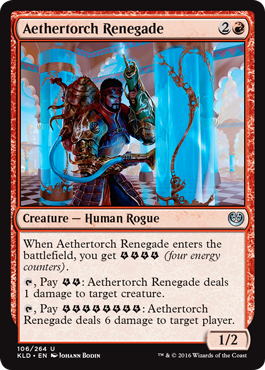 Next up is a very strange card that I’m not sure is really good, or a reheated shit sandwich. Aethertorch Renegade uses the new Energy mechanic, which is basically a type of counter that lives in the Command Zone. You can use them for a variety of things, like on this card, but there are few ways in Kaladesh to constantly create them. So you might be hosed once you run out. What makes them interesting and maybe really fun is that they are an alternative cost. Let’s say on turn 4 you have 4 lands and 5 energy. You can do all of the things, which could be explosive in the right circumstances. I especially like that it makes low casting cost guys useful in the late game, since they might show up to play with the frosty six pack of energy that puts you over the top. 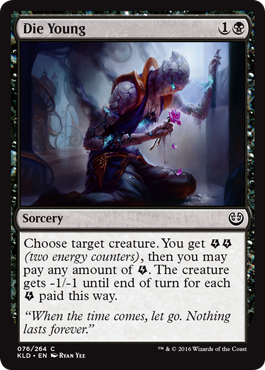 Or helps you turn something like Die Young on.There are a whole bunch of ways to use energy in Kaladesh, which is going to create a whole bunch of situations where the order that something is played might become really important. Say your opponent has a giant beater on the field like our big blue friend Gearseeker Serpent. Now playing Die Young by itself is going to do less than squat. But if you rolled out Aethertorch Renegade first, and then threw a Die Young you could change your -2/-2 into a serpent wasting -6/-6. The weird combos and synergies that the energy mechanic opens up will sometimes make you feel like a genius.

Moving on, Kaladesh has new artifacts called Vehicles. These are weird and exciting new objects that turn into artifact creatures when their “crew” cost is paid. To pay that you need to tap creatures with total power greater or equal than that cost. It gets a little weird, so here’s my absolute favorite example: 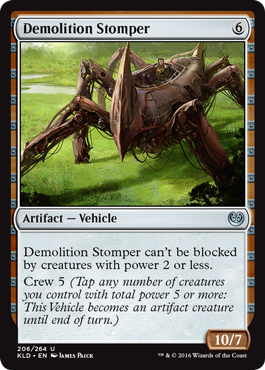 Look, I didn’t say that these were the best cards in the set, but the ones that looked the coolest, and dammit, Demolition Stomper, a 10/7 for 6 that literally steps over scrubs, is pretty sweet. Yes, it will probably die to removal, and no, it’s not a bomb, but I desperately want to grin and say, “I attack you for 10.” But there are a lot of very funky interactions that you can create with vehicles. First, when you tap creatures to crew them up, if the vehicle dies, then nothing happens to your creatures. Once they’ve tapped they are no longer associated with the vehicle anymore. So late game your fragile dudes can still be involved on attack. Second, tapping to crew is a cost attached to the vehicle, so things with summoning sickness can still tap to crew a vehicle, which is neat. Third, this ability works on defense and there are ways to make guys at instant speed.

Finally, because frankly it’s the coolest, is an interaction where a vehicle can crew another vehicle. Since a vehicle becomes a creature, it can be tapped to pay a crew cost. So this is a thing that I want to try to pull off. 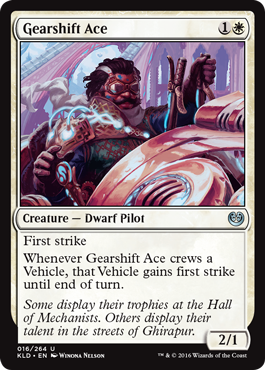 Finally, if you really want to go all in on making vehicles roll, then you’re going to want to get a pilot. One of the nice ones is Gearshift Ace. Most importantly, he’s a dwarf, which is something we haven’t seen since Shadowmoor. Next he’s a 2/1 first strike for 2 which makes my inner spike happy. What’s really fun is that when he is tapped to crew a vehicle that vehicle gets first strike as well. You know what’s more terrifying than a 10/7 first strike? Other than a Blightsteel Colossus, the answer is nothing. So get yourself a ride or 2, and I think you’ll have a fun time letting Gearshift Ace drive you towards a bunch of wins, plus vehicles, which is literally a win-win.

And that’s what we think are going to be a lot of fun to play at the Kaladesh prerelease. Overall the set looks really weird, with a whole bunch of strange mechanics to figure out and, dare I say, tinker with? Join me next week when we look at the cards that give you a feeling of “meh” at first look, but in fact are a total house in our Kaladesh : All Stars.

Until then, I’ll see you at the prerelease.

September 26, 2016 Eric Carr Comments Off on Kaladesh All Stars