Yes, I know we’re technically in the sci-fi exploration issue. Things have been getting all nice and space-y, but I can’t in good conscience let something like this slide. So at risk of deviating from the stringent (re: not really that stringent) adherence we at NitWitty have to our monthly topic, I’m going to talk about the phenomenon that is Pokémon Go.

Where did Pokémon Go come from? And why is it so popular despite its many glaring problems? I ask because, Poké-fan or not, this is something too fascinating for you to ignore. And whether you love it or hate it, only through seeking to understand it can we learn anything about the cultural impact it’s had thus far. And hey — maybe we’ll see that it’s actually closer to our monthly topic anyway.

…To Be the Very Best

For those of you who have never played a Pokémon game before this one (the numbers suggest there’s a few million of you guys), here are the basics: you travel the world to catch, train, and battle these monsters called Pokémon. Not a big change from the main games, but Pokémon Go introduces a new dynamic through the wonders of augmented reality.

Using your smartphone’s camera and GPS, you can see Pokémon that appear in your surroundings. You swipe your finger to throw poké balls at them, which captures them and adds them to your collection. But while the main games have you battling other trainers to help your ‘mons get stronger, all you have to do in Pokémon Go is catch more of the same kind. Every time you catch a Pokémon, you get candy to level them up or evolve them into their stronger forms.

There are more differences between the games, especially regarding where you find new Pokes. Instead of wandering around an in-game map, you encounter Pokémon in real world locations. Your front yard, your favorite coffee shop, even your bathroom could be flush with monsters waiting to be captured. Places you visit may also be classified as PokéStops. These are landmarks, like noteworthy buildings or pieces of art, where you can get items like potions and extra poké balls. Locations may also be classified as Pokémon gyms, where you can battle rival teams for in-game currency to spend on items like lures, which make Pokémon appear more frequently, or lucky eggs, which double your experience points earned.

All these features have led to some pretty substantial social interactions. Many local businesses have been promoting their buildings as PokéStops in an effort to grab new customers, while other, more sensitive places like cemeteries and police stations have discouraged trainers from snooping where they aren’t supposed to or, worse, invading the privacy of others.

If you think it strange that someone would go hunting for Pokémon in a cemetery, then you may be underestimating the power of this app. Parks, malls, and other public locales have seen tons of activity, as hundreds have gathered to play and socialize.

You know how sometimes a new thing comes along that seems to instantly dominate the gaming community? Minecraft did it. World of Warcraft did it. Pokémon itself did it back in the late ‘90s with the Gameboy games, followed by a tsunami of additional media like cartoons and trading cards. With that in mind, Pokémon Go may seem like the second coming of Christ. (Or the End of Days, depending on your perspective.)

This time, the gaming community isn’t the only group who has felt the impact; Pokémon Go is being played by a range of demographics that could make the far-reaching, granny-grabbing sales of the Nintendo Wii blush.

Kids play Pokémon Go. College students play Pokémon Go. Old ladies waiting in line at the supermarket play Pokémon Go. Although the largest demographic is overwhelmingly in the 18 to 34 range, its impact on the tech world cannot be understated. It has more users than Twitter and Tinder, and was the top iPhone app in the United States. People in countries where the app hasn’t been released yet have been downloading the files, braving viruses and other virtual nasties just for the chance to see a Bulbasaur roaming around their living room.

Maybe it’s the larger gamer demographic these days, or the ubiquitous state of smartphones. Maybe it’s the accessibility of a free-to-play app, or the nostalgia trip of having only the original games’ 151 Pokémon roster to catch. Whatever the reason, Pokémon Go is taking over. Stories run rampant on internet forums like reddit of parks and other public places being flooded with players wandering the grounds in search of rare ‘mons. There have been meet-ups with hundreds of well-to-do people, but also traffic accidents, and even a few deaths. Apropos to a game all about evolution, Pokémon Go is sure bringing out a major case of Darwinism for some people. A couple guys in Encinitas, CA — practically our backyard — fell off a cliff and needed medical assistance because they were playing Pokémon Go instead of watching where they were going.

So why are people willing to risk injury for this game? What about it is so appealing? 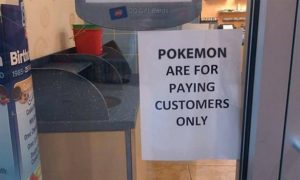 Okay, so I lied. This article doesn’t completely ignore the rules laid out by the issue topic, that most sacred of scriptures. Pokémon Go is a technological leap forward for the science-fiction-turned-science-fact of augmented reality (AR). It also incorporates real satellite maps and GPS — you know, the kind you use to get yourself home after Happy Hour turns into Happy Hours. These combine to create an experience that is novel at the very least, or a neat gimmick at worst. Thing is, many players dreamed of catching Pokémon in the world we know — being the very best, and all. Maybe that’s why so many players are willing to put up with the egregious issues the app has.

Pokémon Go isn’t without problems. Paras and Venonat are from the only bugs in the game, as any amount of time spent with the app will show you. Its initial launch was a disaster, its servers overtaxed by the sheer amount of people trying to make their poké-dreams a reality. Even weeks later, freeze-ups are common, often occurring when waiting to see whether the poké ball you just threw would successfully capture your target. Sometimes the ‘mon would appear in your collection after you restarted the game, but maybe it wouldn’t. Who fucking knows? It’s enough to make a person uninstall the damn thing, except then you remember you’re going out with friends later and who knows what kind of monsters will await you.

I think therein lies the gameplay loop: it’s the possibility of seeing what’s around the next corner. There’s progression, too — catching enough purple rat creatures to turn it into around bigger, more fearsome-looking brown rat feels satisfying. But it’s the unknown factor, the promise of seeing something mundane (you know, like some boring old artwork) turn into something fantastical — that’s what’s making both longtime fans and poké-newbs scurry out in droves to the nearest public work. And inevitably, to each other.

The entire point of Pokémon Go is to explore the world — the real world, the one with wind and dirt and everything. But wait! There’s Science here after all, as the incentive of braving the outdoors is that you can see Pokémon and wrangle them into your collection. This isn’t the work of magic — well, maybe a little, but not the usual kind. There’s a combination of nostalgia, technology, and social intrigue, all blended together in a hard-tasting cocktail. It’s a concoction that millions of people across the world are pounding, one after another. If that isn’t boldly going into new frontiers, then nothing is.

July 28, 2016 Jordan Feil Comments Off on Video Games In Space