What is there to say about an anime that so deftly depicts the creative process? Something about how it might be one of the truest renderings of that artistic pain that I have ever seen? Or, maybe something about how it spoke to me as a writer and put words to a subject that has for the most part only existed in my head? If I am being honest, that wording seems too hyperbolic for my taste. Shirobako is not a perfect show, nor is it a creative masterpiece made to sit among the likes of Cowboy Bebop  or Gintama. But than again, I am not sure it is trying to be. At its heart Shirobako isn’t so much a story about characters as it is an articulation of what it means to be an artist in our commercially driven world. It spans the breadth of space between that first burst of inspiration to the polished product that gets pumped out on T.V. It is the conflicts born from that process, the writer’s block and deadline-induced breakdowns, which Shirobako does so well. As a self-identified artist myself, I was blown away by the show’s accuracy and emotion. For its focus on such a murky, hard to pin-down subject, it does a splendid job bringing its intricacies to life.

Which is exactly why I chose this month to talk about how great it is. This month Nitwitty is celebrating that very same creative energy and I can think of no better anime to recommend than the riveting Shirobako.

At its core, Shirobako is about a group of five friends inspired by the mutual dream of creating anime. They all work in various parts of the anime industry and together their viewpoints work in concert to cover a variety of different and contrasting aspects of the business. The first half of the series revolves around the main character, Aoi Miyamori, and her burgeoning career as a Production Assistant for a new up and coming series.

Part of what is so great about Shirobako is that it loves getting into all those nitty gritty details that other shows pass over or exclude. For instance, there are entire episodes about motivating and working with Key Frame Animators who are over-worked and tired. Later the show actually dives into how the production schedule changes if even one piece of art is incomplete or late. If your art isn’t done then you can’t bring in the voice actors to record, and then if your voice actors don’t record on time then you are in danger of missing your air time. These are the kinds of conflicts that drive Shirobako and it is this rare look inside the creative process that makes the show such a joy to watch and think about. 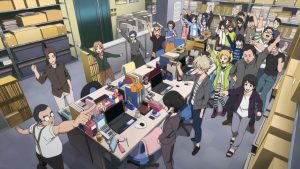 Inspiration and how to manage it is a huge theme in the first half of the series. As a Production Assistant it is Aoi’s job to make sure that the production schedule comes together and works. This  means she is the one who has to talk with the writers, artists, actors, and the director, making sure each and every one of them is on the same page and on schedule. In the course of doing so Aoi is faced with a slew of existential issues ranging from the classic writer’s block” to more abstract problems like depression, doubt, and low self-esteem. Shirobako doesn’t back away from the ugly, it basks in it. There are no obscure or abstract explanations, just a simple story about people and their struggles and that is a beautiful and inspiring thing.

The second half of the series brings in Aoi’s four childhood friends, a Writer, Key Animator, Voice Actress, and 3-D Artist, and follows the group as they work together to finish the anime that Aoi’s studio is working on. At this point there is a distinct shift in how the story is told. It moves away from being a story all about Aoi and instead works to cover a variety of viewpoints and story arcs. From the director who has struggled the whole series with writer’s block, to the young Key Frame Animator who lacks faith in her skills and talent, all of these conflicts start to play a bigger part in telling the overall story. By the end of the show Shirobako stops being about any one character or problem, it becomes a show about the creative process as a whole.

One Will and Destination

Aoi was simply the jumping point for a large discussion about the machine behind commercial creativity. There are so many people out there, I was one of them mind you, that think good ideas and art come from a single burst of talent or inspiration.  That good shows, stories, and concepts, are the work of genius rather than hard work. Shirobako is the story of why that thought is utterly false. Genius and inspiration are the by-product of unwavering dedication and teamwork. Aoi, and her friends and coworkers who stand with her, represent the slow aching grind that stands in the way of any masterwork or piece of finished art. I feel that is a message that needs to make it into mainstream media more often. As a writer myself, I cannot understate how satisfying it was to see a show step outside the fairytale and talk about creativity as a profession. 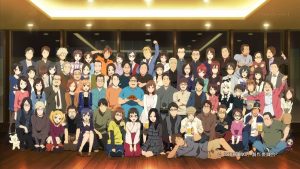 At any one point in the show there was the looming threat of failure. There wasn’t an artist or staff involved in the process that wasn’t struggling with some hidden doubt or conflict; and yet somehow these disparate parts and pieces come together in the end and what results is something magical. Shirobako is far from perfect. There are pacing issues, and for such a dark and heavy subject the show is sometimes a bit too light. That said, this is one of the truest depictions of the creative process that I have ever seen. It doesn’t look away when things get tough and it doesn’t sugar coat the harsh reality that waits for artists in the real world. Instead it offers up hope, encouragement, and a little bit of inspiration, and in my book that makes this a fantastic anime.