As promised, we’re back with more coverage of the new Magic set – Oath of the Gatewatch. Specifically we’re here to talk about the card that at first blush might just look okay, but have interesting strategies that make them surprisingly good in the format. So with that, let’s get into it. 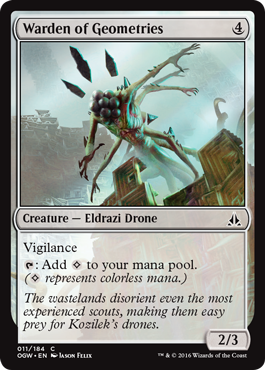 When it comes to colorless, let me repeat something my partner said to me in the middle of a game, “Read your damn cards.” The colorless Eldrazi in particular have really odd abilities that connect in very weird ways. Like, Reality Smasher has Haste on it which is relevant when you’re trying to expedite the delivery of hurt. Warden of Geometries falls into a similar if less splashy category, and it has to do that that Vigilance clause. He (she? it?) is a 2/3 which isn’t the worst body, and taps for that sweet <> mana. Generally, you’ll use the tap ability to put a giant dude into play. After that the Warden will be able to attack with impunity, since your opponent will be way more worried about the heavy you were able to ramp into. As a bonus, “Warden of Geometries” is just fun to say.

Next up we have a blue Eldrazi – Blinding Drone. A 1/3 for 2 isn’t the best thing in the world, and the best thing you could say about it is that it makes a decent chump to block with. But that second ability is what every control deck ever wants, and there’s a reason that Wizards of the Coast doesn’t do it anymore. Paying <> to tap a guy down is gross. Like, super gross. Maybe not Flood gross, but still plenty nasty. On defense just leave this guy up to lock their biggest threat. If/when they play something better, just target that instead. On attack you can tap down their best blocker and get your swings in. All of that for the low price of Blue and 1. I fully expect a blue/colorless control deck in standard soon, and Blinding Drone is probably going to be involved. 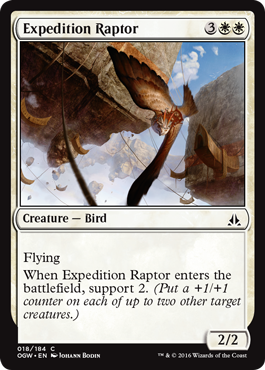 Sometimes all you really want is a big flying bird monster, and sometimes that bird monster shows up at your house and brought a couple of six packs because it knows you. Expedition Raptor is just like that. A 2/2 flying creature for 5 is usually not where you want to be in terms of power level. When it also puts +1/+1 counters on 2 of your other creatures then that makes it amazing. You see, a funny thing happens when you play a 2/2 flier and turn your 3/3s into 4/4s – your opponent forgets about the 2/2 bird. Basically, any time this came down it just got to start swinging for 2, over and over and over again because there were more pressing matters. Even late our little flying friend is a delight since it can Support your huge creatures and make them huger to get damage through. The bird is everywhere you want it to be, and good almost always. 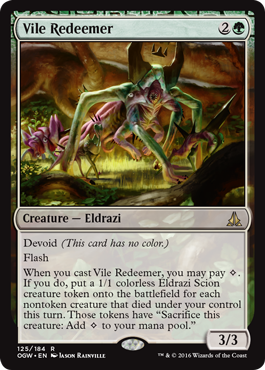 I’d like to take a moment to point out a card that is the opposite of All Star – Vile Redeemer. This card looks great on the surface. It’s a 3/3 for 3, it has Flash and can get you conditional Eldrazi Scion tokens. But in practice, this card is hot garbage. The reason is that ability the makes the little dudes. It forces you to hold this in your hand and leave 5 total mana available in case your creatures die. But it doesn’t count tokens, so all of those scions you just sacrificed don’t work with this. Yet that ability is potentially good enough that you never want to play this as a 3 mana 3/3, and at 5 there are way better green creatures you should be playing anyway. Most of the time it just ends up as a dead card in your hand. The one time I saw that second ability trigger it netted exactly 1 Eldrazi Scion for their trouble, and then they lost. 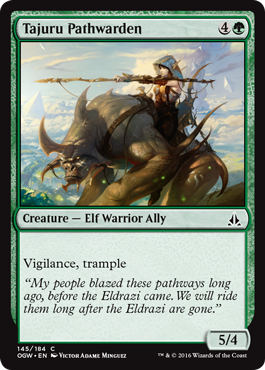 Coincidentally, the card that they lost to was one that they should have played for 5 mana in the first place. Occasionally in Magic you want to play the clever card that does the odd thing. I like those. Other times you want a nice big trample stick to swing with abandon. Tajuru Pathwarden is that stick. 5/4 and Trample for 5 is not bad, but when it also has Vigilance that makes the decision to turn it sideways really easy. Either they block, or take 5. If they block they get to probably take trample damage and maybe trade at which point you have 1 less thing to worry about attacking you. Or, if they don’t block they just get wrecked and still have to figure out attacking around a 5/4. It’s a Kobayashi Maru situation for them, which is great news for you. Every time I dropped this into play, the game was over shortly thereafter. As a little extra sumpin sumpin, it’s an Ally which means that there’s a decent chance that when it comes down a Rally trigger will happen. 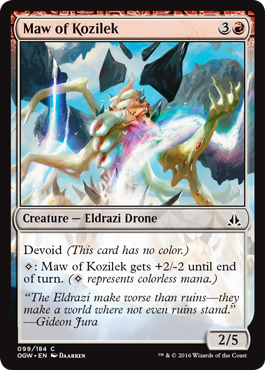 Finally we have what might be one of the most flexible creatures in the set. To make a long, weirdly Lovecraftian story short, with Maw of Kozilek – always be attacking. Like Flowstone before it, it makes blocking the worst thing ever. That’s because if they block, you can tune the power and toughness to ensure yours survives and theirs doesn’t. Or if they don’t block, feel free to let the dude off the chain and beat for 6. It’s a weird threat, and if mixed with an aggro strategy you can keep your opponent on the back foot and guessing constantly, which is a pretty good place to be. If everything is going terribly, then top decking this isn’t the worst either. The high toughness with the possibility of straight murdering most of the creatures in the set makes the Maw a very attractive blocker with huge upside on the counterattack.

With that, I am devoid of things to talk about in Oath of the Gatewatch. If you think I missed something, or my assessments are incorrect, let me know in the comments. Or for that matter if there are All Stars that really shined in Two Headed Giant drop those too.

Don’t forget to join me in a few months for the next set – Shadows Over Innistrad.

July 18, 2016 Eric Carr Comments Off on Eldritch Moon All Stars