This month at Nitwitty we are celebrating space and what better way to kick that off than to talk about Japanese cartoons. Animation has a long history in telling tales about the void above. Some of anime’s all time classics, shows like Cowboy Bebop and Legend of the Galactic Heroes, found their legs in imagining what that world might look like a thousand years from now when space travel becomes commonplace. Typical for the genre there is a tendency to focus on the bigger picture, on all the infinitely interesting possibilities that await us as a species on that fateful road to The Final Frontier. For anime, galactic war tends to be front and center on that stage and it’s for that reason that today I am going with something a little different. Today I want to talk about an anime called Planetes, the tale of a lonely group of trash collectors in orbit around Earth. 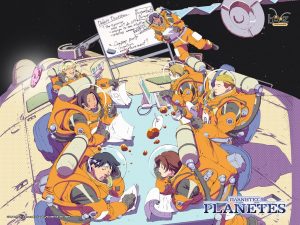 Planetes, written first as a manga by Makoto Yukimura and then later adapted by director Goro Taniguchi as an anime, is a story about people in space. Or rather, about the unintended side effects of putting a lot of people into space, namely things like trash. In a world without gravity or friction, free floating debris is more than a minor inconvenience, it is a life threatening hazard. Planetes is about the men and women who are tasked with eliminating that hazard and the job isn’t easy. Everything in orbit around Earth is moving at high velocity. I mention this because collecting and disposing of trash seems like a stroll in the park until you realize that the park is a radiation filled vacuum and the debris is metal and rock hurtling forward at literally hundreds of miles an hour. When I put it like that suddenly it becomes quite apparent why interstellar trash disposal is actually a thing. Unfortunately for our charismatic cast of characters those figures don’t do anything to change the fact that the job is still all about trash and trash collectors aren’t exactly a celebrated profession.

The cast of Planetes, from eccentric protagonist Hachirota “Hachimaki,” to the young and earnest new hire, Ai Tanaba, is at their wits end about their career. They are the crew of DS-12 “Toybox” and part of the Space Debris Division and trash disposal is the bottom rung. Very few of their crew is there by choice and nearly everyone has a story about how they got there. This is actually why the show works so well. Space isn’t the main focus and neither is the dangerous and ugly job, stories have sung that song and dance before. Planetes is about characters and what happens when you throw a bunch of them into stressful situations in space. Take Hachimaki, the charismatic leader of the trash disposal unit. His dream is to own his own spacecraft but because of his low paying, seemingly dead end job he struggles with whether or not to give up. Which leads to his character getting reckless on the job. He is always putting himself in a position where the slightest mistake or mishap might send him plunging through Earth’s gravity, a speck of human meat that burns like anything else on unprotected reentry. A stark difference in consequence if you think about what might have happened on Earth. I mean, depression in a vacuum is a terrifying prospect. Before watching this I had never really thought how much mental illness might complicate things but now I am just blown away that so few storytellers have caught onto it. Mental Illness is one of the hallmark risks of long term space missions and it took an anime about trash to talk about how big of a liability that is. A single person who isn’t paying attention or functioning at 100% and literally everything can go boom. 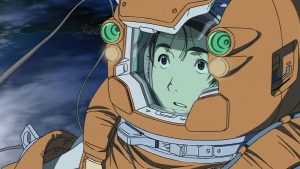 Most of the conflict in Planetes focuses on the inherent hostility of space. Even the simplest of jobs can kill and even if they don’t, there is brittle bone, cancer, decompression sickness, radiation, and the constant threat of a small piece of supersonic space dust punching a hole in your ship and killing you instantly. And yet, by some miracle, humanity has persevered and carved out a place for themselves among the stars. Which is what makes this anime such an absolute delight to watch. Every single character on the screen is in the process of surviving. The dreams they carry push them to endure all space has to offer and that tradeoff is such an underappreciated aspect of space travel and living. So many stories focus on the bigger picture, on the potential for war, aliens, and wealth. Those concepts, while fun, don’t fully incorporate the struggle of the individual. On how much the simple concept of space is going to change the human condition. Planetes takes the time to care and because of that it elevates itself from just another anime in outer space to a true time tested classic.

Beyond the characters, Planetes offers up a really unique story about space in the short term. The world being imagined isn’t thousands of years in the future, I doubt it is even hundreds. Things like debris disposal are an issue even today. For years the United States and all the other countries of the world have been launching satellites and probes and god knows what else into space and all that junk has added up. Even now there is legitimate concern on the part of NASA and her sister agencies over how they are going to protect current projects from the floating corpses of their past. Planetes asks important, and often overlooked, questions about the immediate future of space travel and does it in a way that is both technically accurate and fun to watch. Hachimaki and his crew are not some writers dream of another world, they are his projection of what ours might look in the very near future. And it is that connection that really allows the viewer to immerse themselves in the story and its denizens. Watching the anime for the first time I could remember how much I cared. Hachimaki and Tanaba and all the rest were more than just cool anime design. They felt like real people that lived in a world not so far off or different than our own. 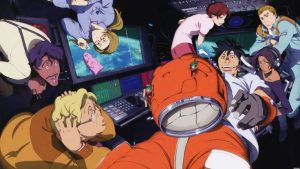 That feeling is what drives Planetes ahead of its peers and predecessors. The crew of DS-12 “Toybox” is more than fantasy or fiction, their struggles and dreams are what we as a species might be grappling with in the near future. Yet there is something beautiful about watching that all play out so seamlessly on the screen. In some ways I would rank the series among the best science fiction that I have ever watched or read. I mean, I would be remiss in saying that there was none of that trademark zany anime silliness, but if you are willing to look beyond that Planetes is a truly gripping tale about humans that live in space. Something that we could use quite a bit more of in a world where technology and engineering have all but stopped taking baby steps and are now plowing full speed ahead towards a space bound humanity.

For those of you interested in watching the series the dvd version is available for rent via Netflix here.