All hail the reign of the postmodern superhero. Seriously, Deadpool is great and deserves your entertainment dollar. Go watch it, come back here, and then thank me. If you have seen it already, this is the Spoiler Review, and we’re gonna get deep up in Deadpool’s guts and talk about how the artful mashing of parody, postmodern girth, and unstoppable humor makes this film great.

The plot, such as it is, borders on the side of basic. Reluctant “fixer” Wade Wilson meets a girl named Vanessa, falls in love, and then gets cancer. You know, because girls are hot. Since the cancer is inoperable, and like, everywhere he participates in a test that will supposedly cure his cancer, and at the same time give him superpowers. So far, this is all in the trailer. What’s not, is that the procedure that was supposed to cure said cancer is actually supposed to turn him into some kind of mindless zombie as well, and it triggers through a series of torture porn sequences that wouldn’t be too out of place in a Saw movie.

Upon his escape, Wade is horribly disfigured and takes the name of Deadpool. Feeling that his new ugliness will make him repulsive to his girl Vanessa he goes about hunting down the people that did this to him with the hope that they can fix his face. In an effort to find Ajax (AKA Francis) Deadpool brutally interrogates and murders large numbers of Ajax’s men, leading to that sequence in the trailer involving exploding SUVs and a bridge gunfight. *

Moving on, Deadpool’s long awaited revenge takes a turn for the worst once Colossus and (the supremely named) Negasonic Teenage Warhead show up and misunderstand the situation. This leads to Ajax discovering that Wade is alive, at which point he kidnaps of Vanessa. Long story short, Deadpool enlists the help of the 2 mutants that messed up his last plan, and the 3 of them attack Ajax’s base, kill basically everybody, and save the girl. In the end, while Colossus is talking about what it takes to be a hero, Deadpool gets tired of his monologue and brutally executes Ajax, because it’s that kind of movie. 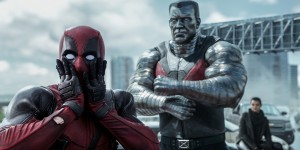 Plot wise, the movie follows the same sort of beats that one would expect from the Hero’s Journey Monomyth and even in terms of comic book movies it’s just a tad formulaic. Structurally Deadpool takes the concept of starting the story as close the action as possible, and making use of a frame narrative to it’s insane and logical conclusion. Case in point, you see that bright red asshole shape * in the rundown? That’s where the movie starts. The car chase, the subsequent shootout / katana slap chop demonstration are all used as a frame narrative. And it’s kinda great since it gives a reason for Deadpool to converse with the audience directly, creating a meta-commentary within a film that is trying to also be a meta-commentary about a genre. Let’s just say it’s all very meta.

I’ve previously talked about Charlie Chaplin, and the idea that things are happy, sad, or repulsive in film based on their juxtaposition with other elements that preceded them. That the front half of Deadpool is a frame narrative within an extended action sequence gives the writers and director the tools they need to do whatever the hell they want. The result is a cinematic mind fuck followed by a cuddle. A sad cancer scene can smash cut back to a dude getting thrown from a motorcycle. Deadpool seemingly torturing somebody gets to cut to his own torture and justifies his own brutality. The flexibility available is really something, and what Deadpool does with that flexibility is something you more often see in a Tarantino film.

Deadpool is a bloody, violent, goofy, movie that seems like it’s cares more about the character and the form than it does about the audience. It’s gets so caught up in playing with the form of the superhero genre, both in the comic and in the comic movie medium, that at times it threatens to possibly alienate the audience entirely. And yet, it somehow manages to pull it off just as deftly as Wade Wilson pulls off the myriad impossible flips he’s constantly contorting himself into. I love that it would rather be it’s own thing than try to grovel for the approval of the audience. Deadpool manages that magic trick by being capital “D” Deconstructionist to the point of parody and reveling in that absurdity. Deadpool doesn’t work in spite of the rampant self awareness of itself and the genre that it finds itself in, but because of it.

Even though the movie is draped in structural playfulness, the whole thing is super bloody anyway, and in a weird way it brings a sense of realism to the whole affair. When it comes to the fights, while they are staged like something you would expect to see in an X-Men movie, the effects on the poor bastards without a healing factor are far more similar to (the also pretty great) Daredevil. People bleed, holes get ripped through dudes, a guy leaves a bloody streak across a hockey rink as he tries to crawl to safety. Unlike most comic movies, Deadpool is brutal. It’s so bloody in fact that I checked when I got home to see if Mark Millar was involved somehow (he’s not). 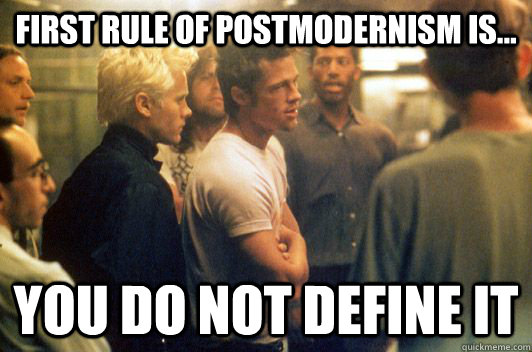 Playing well in the postmodern realm, there are basically 3 movies joined together in Deadpool. There’s the superhero origin story tied into a grindhouse style revenge narrative caked with a thick frosting of referential humor. Like a true postmodern work, Deadpool cares nothing for tradition and manages to think even less of genre convention. Although it is that juxtaposition that makes it all work so well. It shows graphic violence and plays it for laughs, while taking an origin story and making it beside the point both narratively and metaphorically.

In different (lesser) hands, the film could have been just a goofy romp, and Deadpool’s propensity for busting through the 4th Wall to comment on everything used as a bid to make jokes. Make no mistake, it does that, and it does it frequently enough that the film is genuinely funny. But if that was all the Deadpool was, it wouldn’t be nearly as good, nor as interesting. By combining that meta-humor with a film whose hyper violence almost borders on pornographic, it snaps the audience back and forth through so many changes of tone in a single scene that it serves to amplify everything. As the audience we need the non-sequitur joke to get past Wade’s horrible propensity for dismemberment.

Additionally, that pervasive humor becomes an actual character trait and its presence is used to serve the plot. During one of the many “Wade gets tortured so his powers will trigger” sequences, the villain Ajax tells Wade that humor is something that never survives the process. This is simultaneously a dig at other superheroes, but flags something important about Deadpool. On a basic level, the film presents Wade Wilson’s humor as a metaphor for his humanity. If becoming a weapon makes you lose that, and Wade manages to keep his in spite of everything that’s happened to him, he’s still won. It’s the sense of humor that got him the girl, and it’s his goofiness that makes him more than just a killer. 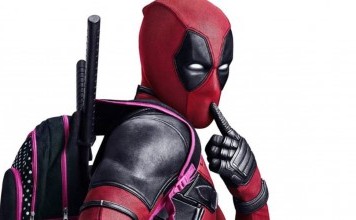 During certain sequences when Wade loses that humor, he turns into a terrifying monster (his escape from the facility that gave him his powers for example). In contrast, when he’s doing awful things (the hunt down Ajax sequence is a stand out example) it’s like his ability to crack wise makes him seem fun, and non-threatening despite what’s happening onscreen. The stark contrast is very often hilarious.

To sum it up, Deadpool ‘s easily one of the best comic movies I’ve seen since First Class and it almost seems to be having as much fun with the medium of film as Scott Pilgrim did. All hail the postmodern superhero – because it’s not going anywhere.