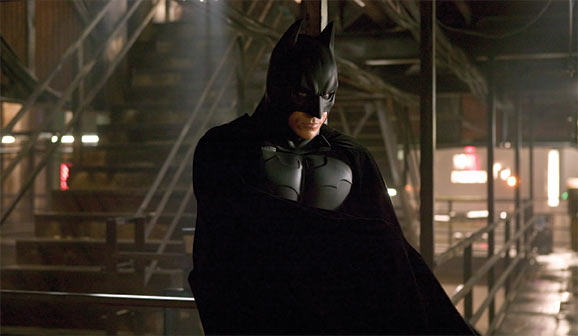 Dark and gritty has been film’s go-to solution for reboots for too long. Going grimdark can work well, so long as the world is convincing enough. However, more often than not it comes off as self-indulgent and hyperbolic to the point of parody — a neo-noir circlejerk, teeth clenching hard, hard as the balls held between balled fists, that ends in a jubilant ejaculation of razor barbed wire.

You see how easy it is?

I’m past the point of pleading on my knees for a change. I’m on my feet now, arms folded indignantly, refusing to eat the shit they want to serve me. Because as consumers, we deserve better. And as creators, either in the fan-film or big budget business, they can do better.

Your Childhood is Now Ours, AKA Thanks, Batman

Everything we owe to the recent flux of grimdark film reboots, we owe to Batman Begins. Comics had been doing it since the ’80s, but in 2005, when superhero movies were still finding their feet, Christopher Nolan got the green light to go ahead and rustle the jimmies of everyone who had thought things couldn’t get any better than the dynamic duo of Captain Jean-Luc Picard and Gandalf the Grey. Although movies like X-Men and Spider-Man were competent enough, they didn’t stray too far from their source material; even comic book casuals likely had enough working knowledge of the fundamentals to grasp these stories.

Therein lies the impact of Batman Begins — it twisted the public’s perception of Batman by changing the tone set by its predecessors. Where previous Batman films could be unapologetically goofy, Begins took itself very seriously. This version of Batman was more than just Christian Bale drinking an entire gallon of Tom Waits patented Throat Gravel™. It took the same dark yet relatively grounded approach to its characters as it did its setting, and it didn’t do so in an inelegant way (not yet, at least). People who thought they knew the Batman origin story were taken for a spin, and we all got to see the deeply personal circumstances and events that led to Bruce Wayne becoming the Bat.

While this formula worked well for the Batman franchise, filmmakers must have seen its success as a sign that dark, edgy, and gritty must be the New World Order. Except where Batman Begins focused on making the sum of its parts (character, setting, and plot) more or less equal to its whole, many other movies focused solely on tone at the expense of just about everything else.

This would herald the beginning of the Dark, Gritty Movie Reboot of favorite childhood franchises.

Why This Keeps Happening

Every time a dark and gritty reboot gets made, another zero adds itself onto Zack Snyder’s net worth. In all seriousness, he’s guilty of some of the most try-hard grittiness in Hollywood. Watchmen never would have happened if Batman Begins had been Batman Bombs. But say what you will, Snyder’s movies and those of its bleak ilk tend to pull crowds.

I suspect a couple reasons are to blame:

They’re successful. Gritty reboots have been making Hollywood a ton of cash. Batman Begins brought in $372 million; The Dark Knight made just over a cool $1 billion; and The Dark Knight Rises made even more. Think it’s just a Batman thing? Think again:

Maybe this is all more correlation than cause and effect, but you can’t ignore the numbers. Hollywood sure isn’t — just look at the most recent offender, Batman v Superman: Dawn of Justice: $872 million. That’s over three times its budget. And that kind of return turns heads.

It’s a monstrous hurdle we’ll have to clear before we start seeing different, more creative reboots, but there it is, standing like a grim, many-faced monolith. Popular films have encouraged a culture where these bleak yet bland reimaginings have a good deal of success. But it’s not all Hollywood’s fault; after all, we keep seeing the damn things. Which brings us to the next culprit for grimdark reboots…

They’re noxious mines of nostalgia, and we keep huffing the gases. Another part of why we keep getting woefully uncreative reboots is due to us giving in to our nostalgia. Directors of grimdark reboots assume that the thing they’re rebooting has gone stagnant. Much of this could be because the audience who was in love with it has now moved on. The next logical step to reclaim these lost viewers is to appeal to what the viewers want now rather than what they wanted then.

Many filmmakers seem to assume that to make a franchise “grow up” they need to make it more “adult.” To take a classic kid’s franchise like Power Rangers or Pokémon and add sex, drugs, profanity — you know, adult stuff. Except plenty of fully grown adults still like Power Rangers and everything without the additives.

Taking a popular cartoon or kid’s show and making it dark is a way to seek validation, to make a film “okay for adults.” But by misunderstanding what it actually means to be mature, this makes the film look even more childish. Most gritty reboots are like kids playing dress up with their parents’ clothing; they don’t suddenly gain all the nuances of adulthood simply by changing their appearance. The core of what made many of those original franchises so dear and precious to people aren’t preserved when you simply slap dirt on people’s cheeks and call it a dystopia.

You’ve already listened to us talk at length about why nostalgia isn’t good for you, but until we get everyone on the same page with reboots it’s only going to keep happening.

What I Want Instead

Not everyone is going to agree with me. Maybe people like the novelty of seeing the things they like cast in a darker tone. But consider what we gain once Hollywood wises up and tries something different with their reboots:

Change the audience. Instead of recapturing a franchise’s glorious past, why not retune it for someone else? After all, sharing is caring, and kids are in desperate need of some quality viewing material. Instead of straight up rebooting a franchise, reimagining it can make anything seem new and shiny again. A reimagination can press reset on what’s come before, so it doesn’t have to carry any past baggage, and go full steam toward a new audience.

Think of how Akira Toriyama did it with the original Dragon Ball. It’s a retelling of the 16th century Chinese folklore tale Journey to the West, but instead of being for dry historians and Asian literature majors it’s for kids (or anyone who likes fun).

Swap the genre. If a franchise goes dark but hits too many of the same notes, why not change the set dressing? Maybe a remake would make a better fit, like taking feudal Japan from Seven Samurai and traveling west for The Magnificent Seven. I’m not saying one is inherently better than the other (though my editor would), but a change in setting can open up many more possibilities for healthy deviations.

Of course, this kind of change can seem just as shallow as making a franchise dark and gritty. Remember, you need strong, justifiable setting and characterization to make it work; you can’t just slap a sci-fi filter on a western and expect everything to turn out okay. You can also change things so the original thing is practically unrecognizable, but again, those other elements all need to fall into place.

Play with our emotions. When we go to see movies, we want to be wowed. Some of the biggest wow factor can come from seeing something we didn’t expect, like a horror movie that gets you to sympathize with the killer. Reboots looking to give us some emotional nourishment can do the same by subverting expectations. It requires some familiarity with the previous work to get the most impact, but you can still feel things.

Just like how Batman Begins played with our preconceived notions, Peter Jackson’s King Kong flipped the monster movie genre on its head by giving us a character who sympathized with the beast. King Kong may not be dark and gritty in the sense we’re talking about, but it’s a good example of how the entire tone of the movie can change to meet a new vision. Again, let the story elements justify the tone, not the other way around.

So that’s where I stand: enough with the “dark and gritty,” give me more “unique and pretty.” Hollywood can’t keep this up forever; sooner than later we’re all going to figure out we don’t have to go to a theater to see worlds more dismal than our own. I guess all I really have to say at the end of the day is this:

Or maybe you like dark and gritty, and if you do, tell me why in the comments.