Masterwork Mangaka: Berserk and the Strength of Art

What is the first thing that comes to mind when I say “Manga?” Are you thinking of cat ears, over sized eyes, magical girls, and giant plot armored robots? If so, you are right. Those concepts are found in many stories, and as embarrassing as this is to say, they are not even the worst of the bunch. Manga is as diverse a medium as any other form of art and some of it, unfortunately, is only there to pander and sell. The happy side effect of a cat ear loving, magical girl worshiping, plot armor robot buying, subculture. With that said, do not be scared off by all the fluff and fandom otaku culture seems broadcast. It is only fools gold hiding the real treasure underneath.

When I think of manga, I think of the rare instances whereI am transported from the comfort of my home to unimaginable futures, or smoke and scream-filled fields. Where I inhabit distant histories in which I live and die among the samurai, or maybe wander a simple present day where a few good kids want to try and start a band.
What if I said that manga has the ability to weave culturally relevant, multifaceted narratives. What if I said that it rivals anything popular fiction has to offer. Would you believe me?
I wouldn’t. Which is exactly why I want to introduce my bi-weekly column series, Mangaka Masterwork. A somewhat serious attempt to wade through the bullshit and spotlight the very best of what Japan has to offer. 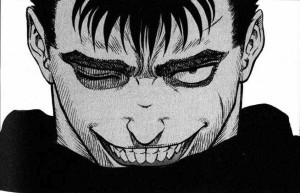 With that in mind, there is no better starting point for our adventure than Kentaro Miura’s masterwork, Berserk. A manga whose fame rests on the shoulders of The Black Swordsman and his impossible iron slab of a sword.
Berserk is more than a title, it’s a world; A concept that propels characters forward and fuels the gore squeezed in between its pages. The story of Guts The Black Swordsman is a tale spun in a medieval European setting that both looks and smells like reality. Known as being one of the most well drawn and detailed manga ever crafted, Berserk resembles more a photograph taken from history than a comic. 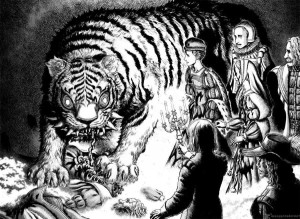 In the world Guts stalks, life is perilous and often only as long as a man’s sword and wit. The narrative reminds me of Ron Howard’s Conan The Barbarian in that it follows Guts through his evolution as a warrior. The story is not a single chronological plot line. It jumps between differing stages of his life, often exploring the gritty circumstances that forged the man he has become. Much like Conan, Guts is wild and untamed. He does not wield magic or a silver tongue, he has his fists and a sword and a ugly tempter. Barbarian inspired blood runs through Guts veins and its these elements that construct the heart and storytelling of Berserk. A story that starts with the same rough brutality that its predecessors made famous. 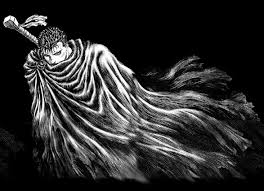 As the manga begins it follows Guts in his youth, he is born from the corpse of his mother, one of many bodies strung up for ravens after war. Guts survives by falling into the hands of simple woman named Shisu, the wife of a mercenary. Guts has a cruel childhood, his surrogate mother dies of the plague and as the circumstances of her death can be considered a bad omen, the blame is shifted on to him. These trials quickly hone our young hero into a weapon. A cold but moral killer who does what he must to survive. His abnormal growth as a warrior continues under the tutelage of his stepfather Gambino, and as readers we are drawn into the world and begin to live and fight beside him.

For me, the hallmark of a successful manga is in the art’s ability to tell a story. There is no difference in this regard between manga and written fiction, both mediums must follow the same rules and utilize the same literary tools to form a coherent narrative. The difference is in how these two mediums go about creating. In fiction the author uses words to paint a mental picture, and readers’ imagination does the rest. Manga on the other hand, forms the pictures for you with hand-drawn lines filling in for words, allowing the reader to experience instead of create. There are things in the world that cannot be simply felt or imagined or read, they need to be seen and experienced. It is not enough to read about how hollow a life of revenge is, we need to see Guts toil and churn. We need to watch as Miura’s clear cut art turns ragged as the main character is swallowed with rage. We need to experience his despair as the wheels of time spin tragedy all around him, and the page is torn and spilled with black. In those moments Miura’s vision swallows us, and in his inescapable current of art he shows us what manga is capable of. 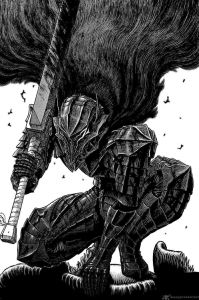 We feel Guts’ pain, his misery, his suffering, and because of this we begin to see our own reflection. We are captured by the photorealistic art and wooed by the unfiltered emotion that drives the narrative and our swordsman. Berserk is not just a title. Miura, through his artwork, makes an argument about the relationship between violence and hatred and love and despair. His statement: That emotion is a singular aspect of the human condition and no matter what aspect or shade, they all exist within us. To be human is to be berserk in nature. 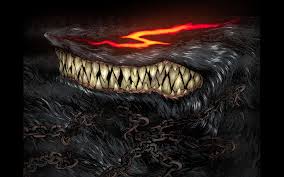 A Look to the Future

Kentaro Miura’s masterwork is only just the the beginning. There are dozens of equally fantastic stories I want to talk about and explore. To that end we will take a journey through some of the absolute best, and strangest, manga of the past fifty years. The first five of which include works by some of the greatest authors and artists of the past twentieth century: Ozamu Tezuka, Otomo Katsuhiro, Urasawa Naoshi, Takehiko Inoue, and Harold Sakuishi. Look forward to it!